LOVE AND JUSTICE IN A CONFLICTED LAND

REFLECTION ON AN OLD MOVIE, “THE LAST SAMURAI” 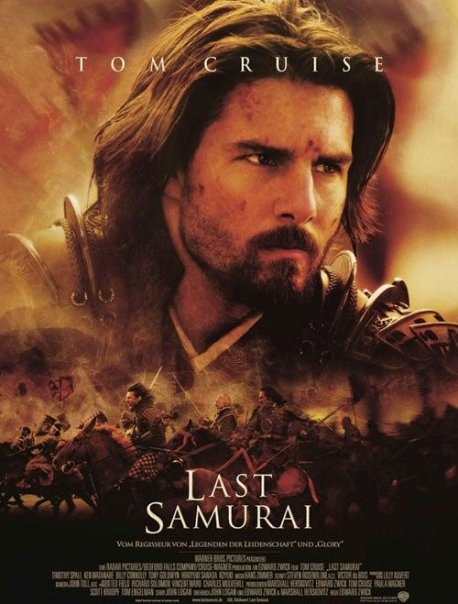 Set in Japan during the 1870s, The Last Samurai tells the story of Capt. Nathan Algren (Tom Cruise), a respected American military officer hired by the Emperor of Japan to train the country’s first army in the art of modern warfare. As the Emperor attempts to eradicate the ancient Imperial Samurai warriors in preparation for more Westernized and trade-friendly government policies, Algren finds himself unexpectedly impressed and influenced by his encounters with the Samurai, which places him at the center of a struggle between two eras and two worlds, with only his own sense of honor to guide him. (Theatrical Release Poster)

My cardiologists told me I have a coronary heart disease. Despite my active lifestyle, I was told I’d get it because both my parents have it. So here I am, ordered by my doctors to stay in bed, watching old DVDs, while waiting for my surgery.

I found myself crying after watching this movie. Perhaps because I am subconsciously resenting the fact that I have heart disease. Perhaps I identify with the character played by Tom Cruise, having trauma because of injustices done by the state against the Indigenous Peoples. Or, perhaps, I’m just getting old and becoming more emotional. Whatever! The fact was, I cried after watching the movie.

So, I did some Zen meditation and rested from the cognitive noises within me.

Afterwards, I reviewed the movie in my imagination. I found myself watching the movie again in my mind through, at least, four layers of lenses. Then my emotional reaction suddenly made sense. I began to see my subjective feelings from a more ‘objective’ (I think?) point of view.

1. THE LENS OF MARTIAL ARTS. I like Japanese and Chinese sword fights, especially when the directors and the cinematographers understand the irreducible complexity of a simple move in martial arts. The use of Japanese sword (katana) was so articulated in the context of the Bushido (The Samurai Code) and the ethical standards of honor, compassion, duty, excellence, and service the Code represents. They must have trained Tom Cruise in the art of katana—at least, the fundamentals.

Of course this love of martial arts is contrary to my non-violent spiritual and political conviction. This is one of those aspects in my life that is not coherent. It annoys me! I wish I’m more consistent with my views and practices about life and reality!

2. THE LENS OF PHILOSOPHY AND ETHICS. A whole article can be written about the delineation between Western philosophy and Eastern philosophy in this movie. I guess most critics will focus on that.

I have chosen to focus on the philosophical issues of PreModern and Modern values expressed in this movie. Modernism is a narrative that the universe is a huge machine, in a closed system, which is populated by rational individuals. The Western diplomats and the military experts that went to Japan with Tom Cruise’s character were the ‘evangelists’ of the good news of Modernism. The big word in Modernism is “progress.” The Samurai warriors were the representatives of the old, traditional, backward Japan—as seen from a Modernistic perspective.

This movie is a postmodern critique and evaluation of the interaction between the representatives of Modernity and the representatives of Tradition or PreModernity. I can’t help but read critical questions between lines while watching the movie: Did Modernity really bring progress to humankind? Are Traditional Values really backward and counter-progressive? What happens to people when we mechanize a society? Should we reduce the person as a modern “individual-in-the-marketplace” in the name of progress? Is it really right that the pre-modern person in the traditional society—the “person-in-community”—be annihilated in the name of progress? Should we continue to erase the “poetry-of-our-humanity” and replace it with “efficiency-of-our-productivity,” all in the name of progress?

We cannot go back to the Pre-Modern Era. Modernity is here to stay. In fact, the impact of computer technology brought Modernity to its advanced stage—that is, HyperModernity. This is both a blessing and a curse. As a blessing, HyperModernity is helping us solve problems in communication, transportation, medical science, and information processing. As a curse, we have the ability to kill people more efficiently and to destroy our planet more quickly. It’s ironic that, in this movie, America helped Japan modernize its military capability and the Americans were paid handsomely. The same modern Japanese military attacked Pearl Harbor a century later, and the Americans paid dearly—not just with money, but also with the lives of their sons and daughters.

Perhaps it is time to re-write the “poetry-of-our-humanity” at par with the “efficiency-of-our-productivity.” Perhaps we should stop sacrificing human beings before the altar of an idol called “Progress.” Only then can we define human existence not so much on how we died, but rather, on how we lived.

3. THE LENS OF POLITICAL-ECONOMIC JUSTICE. Politics is all about power. Economics is all about wealth. Wealth and power are like the two pedals of a bicycle. They are the yin and yang of the wheels of international relations. America, as depicted in this movie, made money by selling war technology to Meiji Japan. Meiji Japan, historically, became more powerful, not only in Japan, but throughout East and Southeast Asia. Eventually, however, Japan aligned itself with the enemies of America. Then in World War 2, America used its weapons of mass destruction against Japan—in Hiroshima and Nagasaki.

It seems that this has been a pattern with the United States’ foreign policy. They would arm an ally as long as they can use such allies to advance their political-economic hold in a globalizing world. America gave Mao Zedong and his People’s Liberation Army military equipment against the Japanese during WW2; after the war, the Chinese Communists used those arms to take control of China, Inner Mongolia, and Tibet (Han Suyin, “Eldest Son: Zhou Enlai and the Making of Modern China,” pp. 178-194).

America armed Iraq when Saddam Hussein can be used against the Ayatollah Khomeini of Iran; later, Hussein turned against his own people and against Kuwait (“Hidden Wars In the Middle East,” Terra Documentary Video, www.hiddenwars.org).

American CIA trained the Mujaheddin in Afghanistan–one of them was al-Qaeda’s Osama bin Laden–to fight a guerilla war against the Soviets; later, bin Laden used the same guerilla tactics he learned from the CIA against the Americans (“In Search of AlQaeda,” Frontline Documentary, www.pbs.org).

America armed Ferdinand Marcos to protect its military bases in the Philippines even though they knew that those military materiel were largely used to oppress the Filipino people; when they were done with Marcos, they spirited him out to Hawaii to escape justice from the Filipino people (Heather Gray, “Opposition To American Military Occupation: The Case of the Philippines,” http://www.commondreams.org/views03/1117-11.htm).

This movie also brought up the issue of one of America’s most profitable exports—modern, efficient weapons. Today, this business is euphemized as “defense industry.” Right now, rich and poor nations—led by the US—have already appropriated more than US$80 billion on military spending. This breaks my heart. This figure flashed through my mind during the part in the movie when the United States soldiers were massacring non-combatant women and children of the American First Nations. This was the nightmare of Tom Cruise’s character, remember?

Every year, 20 million people die from hunger and hunger-related diseases. This is equivalent to more than 150 jumbo jet crashes daily for a year in which there are no survivors and in which half of the victims were children. If these unjust military spending and foreign policies are justified and politically supported by the majority of the American voters in the name of patriotism and consumerism, then I pray that those people might have dreams, even nightmares, of suffering children and women around the world, until they wake up to their political-economic responsibilities in the face of current global injustice!

As a Filipino who grew up in a city adjascent to Subic Naval Base (the biggest US military installation in the Pacific during the Cold War) I see America through the eyes of one who has experienced being intimidated by American military presence in our own soil. I saw them guarding their American interests at the expense of the dignity of the Filipino people. As a teenager, I did not understand why they guarded their hamburgers, beverages, toys, chocolate bars, and Levi’s jeans with their M16 rifles, F14 fighter planes, tanks, and missles while we share our land to them. The painful part was that, I saw those Americans throw away, without totally consuming, their hamburgers, beverages, toys, and chocolate bars in a nearby dumping areas and guarded those garbage dumping areas from local kids with their M16 rifles! The teenager in me reacted while I was watching “The Last Samurai.” Americans have been entrusted with so much; Americans, especially those who claim to love God, are expected with so much. America is not entitled to the goods and services its people are enjoying; America is merely entrusted as a steward. What America is enjoying is not a right; it’s a privilege. What America have is not absolutely for the Americans; what America have is absolutely God’s. And what is God’s is for all the people of the world to share and enjoy. We’re all “persons-in-community”; we’re not merely “consumers-in-the-marketplace.” The world is our community. Our life is inherently connected with the lives of all people around the world.

4. THE LENS OF A RELIGIOUS LEADER’S JOURNEY. Tom Cruise’s character at the beginning of the movie was an alcoholic, purposeless gun salesman. I wonder how many pastors and religious leaders are merely buying and selling church growth programs that would increase church attendance (churchy term for ‘religious customers’) as well as increase their tithes and offerings (churchy term for ‘sales and revenues from religious goods and services)? In a sense, I was part of that religious marketing system. I felt meaningless and purposeless even though people around me thought I was successful.

Like Tom Cruise’s character, I’m done with salesmanship as far as irrelevant, outdated religious programs are concerned. I’m in the process of growing with a community that is really burdened to bring peace—the salam/shalom that God gives—in the lives of people from different cultural backgrounds. This peace is the kind that transcends our rational analysis, guarding our personal hearts and minds. This peace is also the kind that is the result of political-economic justice. This peace is both subjective-personal and objective-political.

For me, the purpose of pastoral ministry is not to sell ‘a god-belief system that can be packaged neatly in a box,’ but a God-given privilege to walk with, and grow with, a community of people in their search for authentic spiritual experience with the Relational Creator who is beyond our theological categories.

“The Last Samurai” helped me cry, not just to express a ‘justice-motivated anger’ (otherwise known as ‘righteous indignation’), but also to enjoy the serenity of God’s shalom.

The movie, after much reflection, served its purpose. It helped me to be relaxed–good for my heart. I enjoyed the show. And yes, I was entertained.

Permanent link to this article: https://waves.ca/2009/06/18/reflection-on-an-old-movie-the-last-samurai/