ON GAZA AND ISRAEL: PEACE IS POSSIBLE!

A REFLECTION ON THE MEANING OF OUR FAMILY CREST 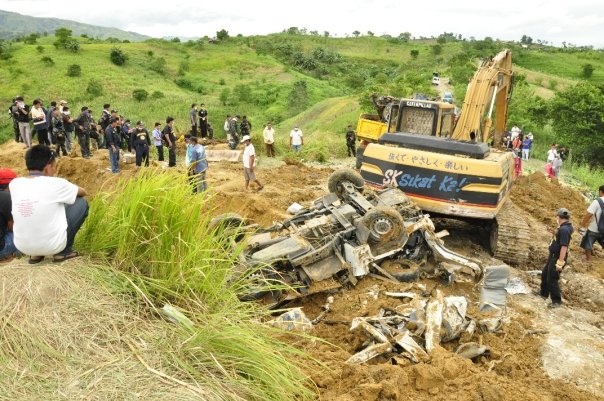 I was there the day after it happened.

They were still digging up the bodies of the 57 people who were tortured and murdered in the Municipality of Ampatuan, Province of Maguindanao, in the southern island of the Philippines called Mindanao.

Scared.  Angry. Frustrated. Such mixed feelings brought me to my knees in prayer. That event intensified my desire to continue our small organization‘s contribution to an active non-violent approach towards justice and peace.

For the families of the victims in the Ampatuan Massacre, justice and peace have been illusive! This is a sad story of a prevailing culture of impunity in our country.

Today, I’m saddened that a number of individual members of the Ampatuan clan are running for the 2013 election under the banner of President Benigno Aquino’s Liberal Party. Some of them are running under an opposition party called the United Nationalist Alliance. What would this mean to the on-going prosecution of individuals accused of various charges connected to the Ampatuan Massacre?

This massacre was a direct result of the Executive Order 546 issued by the former president Gloria Macapagal Arroyo legitimizing private armies among the political dynasties in our country. President Noynoy Aquino promised the Filipino people that he will rescind this executive order. What happened to that promise? Why is P’Noy not dismantling the private armies in our land starting with an act revoking Executive Order 546?

May we all continue to cry for justice that leads to genuine peace!

Permanent link to this article: https://waves.ca/2012/11/23/the-ampatuan-massacre-justice-delayed-justice-denied/