A REFLECTION ON THE MEANING OF OUR FAMILY CREST

I’M PRAYING FOR FAITH, EVEN AS SMALL AS A MUSTARD SEED 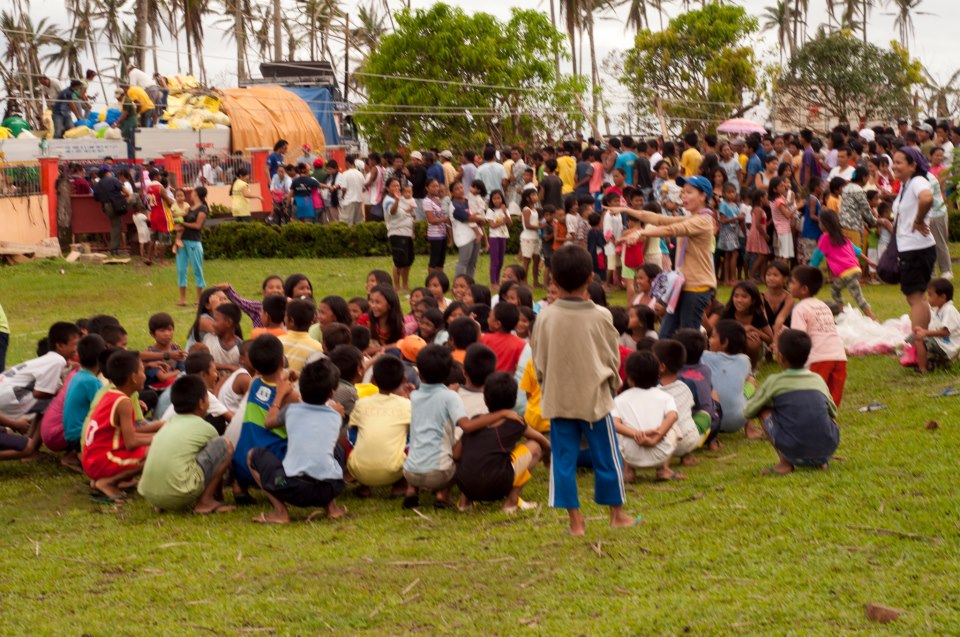 This is 2012 Christmas Day in Barangay San Antonio, Municipality of Cateel, Province of Davao Oriental. While the parents were receiving their family relief pack, the children participate in a trauma first aid facilitated by our trained psycho-social volunteers. PeaceBuilders Community distributed more than 5,000 family relief packs among the most devastated families in four hardest-hit villages similar to San Antonio. Typhoon Pablo destroyed more than a million homes in Mindanao Island.

Our plans for Christmas was set.  We were planning to have a generous, memorable Christmas celebration with the PeaceBuilders Community. Then as a family, we were planning to go to a nice, quiet resort with internet so those of us who are in Mindanao (Joji, Byron and I) would be able to Skype with those who are in British Columbia (Lele, Allan, LJ, Eli, Kiana, Elia, Kaya, and Eve Bear).

Then came Typhoon Pablo (international name, Bopha) at around 2330h, 03 December 2012, raging through Southeastern Mindanao with winds up to 260 kph. Throughout that night, hundreds of thousands of families were hit by this “invisible monster that swept villages with a sharp, destructive razor.” More than one million homes were destroyed. Almost 2000 lives were lost. About the same number of persons are still missing.

Our community and our family said goodbye to our Christmas plans.

We were confronted with the reality that our partners in the field were suddenly homeless, wet, hungry, and traumatized. Some lost a loved-one or two. Some were still looking for family members who got lost during that fateful, pitch dark, night of December 03.

The staff at PeaceBuilders Community voluntarily cancelled our Christmas party and proposed that the budget allocated for the celebration be used for relief. It did not stop there. Since we have no budget for a massive relief operations needed for a disaster like this, we started brainstorming: (a) Get help from the Mennonite Central Committee; (b) Connect with international relief organizations; (c) Help organize an inter-agency relief operations in the whole Davao Region; and, (d) Let’s borrow from ourselves–that is, use our December salaries as cash advance for a relief fund we’re going to raise by faith!

We raised $30,000 in cash, and through partnerships with business corporations and other organizations, we were able to distribute both food items and non-food items with an estimated value of $100,000.

Beyond those pleasant surprises, volunteers came–a whole neighborhood who were also flood survivors, the commando unit of the police force, some elements from the military, a group of cyclists, nursing students, doctors and nurses from the Muslim community, a professional association, local church groups, and many more.

Yesterday, we travelled early in the morning from Davao City to the typhoon devastated areas. With us were 5 ten-wheeler trucks carrying 5,400 family relief packs (we produced beyond our goal of 4,300), 7 vans carrying 77 volunteers–they were composed of relief workers, doctors, nurses, psycho-social specialists, pastors, and community development specialists.

Our team distributed all the relief goods entrusted to us by our partners. We were given the privilege of celebrating Christmas with the survivors of Typhoon Pablo.

In the midst of the devastation caused by this class 5 typhoon, we want to see things from the lenses of love, faith, and hope. By God’s grace, we will continue our response to this major disaster through the God-given lenses we have.

Right now, we’re getting ready for the next phase, which is rehabilitation.

Permanent link to this article: https://waves.ca/2012/12/26/our-team-celebrates-christmas-with-typhoon-survivors/