THE HEART OF NONVIOLENT RADICAL TRANSFORMATION

PATRONAGE POLITICS AND RADICAL TRANSFORMATION: A CALL TO CHRISTIAN LEADERS 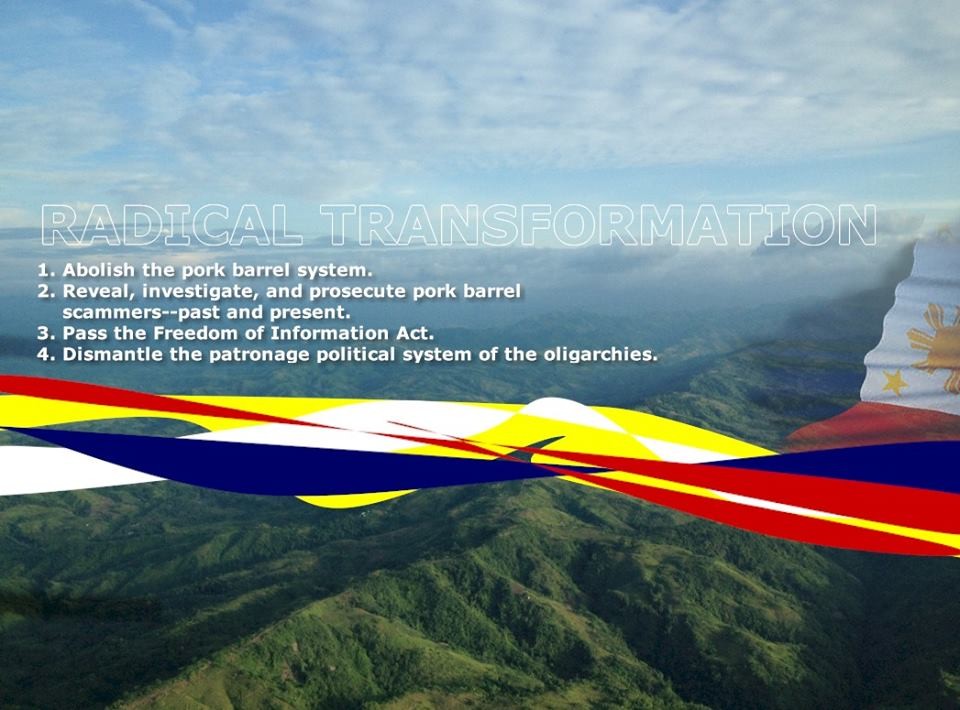 We are deeply mired in a socio-political system that enslaves our people and devastates our land for so long. This inherently corrupt system is called ‘patronage politics.’ It’s like a poison tree. Its leaves and branches release toxic elements in our social environment. It poisons and destroys our land. It poisons and destroys our people, our children, and our children’s children. It corrupts the spheres of our society — arts & sciences, business, church, daily news & media, education, family, and government. We need to take out the radix or the root of this toxic tree from our beloved land. We need to work together towards a radical transformation in our society.

Praying for a Radical Social Movement

My spirit is groaning for a non-violent, radical, alternative movement that is moved by the Spirit of God from the ground up.

A Time for Radical Transformation

We are entering a new historical segment of radical transformation in our land. The people have started to question the prevailing patronage political system. They will advance a new liberating system that would free our government and our institutions from the abuse of the few political and economic elites whom we refer to as oligarchies or traditional politicians (TraPos).

As we trek through this new segment in our national journey, Christian leaders will be confronted with tasks so different from our previous and current ministry exposures. It will be the ministry of dialogical, justice-based reconciliation between those who belong to the oligarchies and the common people who are being oppressed by the oligarchies.

It begins now. As a result of the explosion of the pork barrel scandal, a ministry challenge in the area of social theology and ethics is now confronting us.

Oligarchies are mostly remnants of former colonial families and their cronies who maintained their ownership of the best lands in our country based on Regalian Doctrine. These elite families made sure that the laws of the land, especially those laws about land ownership, are not changed. To protect their interests, they made sure they control the executive, legislative, and judicial processes in our country. Their land capital was extended to commercial-industrial capital, merged with global capital.

These national-global mergers of mega-capital are protected by the laws of the land. Since the interests of these elite families and their global partners are legal, they are then protected by the armed forces and the police forces of the land, with the support of the global military power operating in our land.

Some of these colonial families inter-married with certain landed, traditional leaders in many indigenous communities. These inter-married clans of colonial families and tribal royalties brought vast areas of lands within their ancestral domains under the Regalian system. When the new elites opened their lands to modern agri-business corporations, many indigenous clans outside these mixed marriages were pushed up to the mountains. Their traditional livelihood began to disintegrate along with their indigenous governance, culture and identity. Meanwhile, the new elites morphed into local oligarchies. Soon, they sent their children to senate and congress to join the national oligarchies.

The Big Media and the Perpetuation of Oligarchies

Through the big media, the masses are lulled into a kind of entertainment that paralyzes their analytic capabilities. They are also pushed into an economic state that made them easy targets for financial manipulation especially during election time. A dumbing media and an unjust economic system create and sustain a people of mendicants who are easy prey for patronage politics. And true enough, the masses indeed reelect the oligarchies. The price for each vote? From 100 pesos to 1,000 pesos. Then as soon as the oligarch-politicians assume power, they would immediately get their money back through various forms of pork barrels.

This is the story of patronage politics that enslaves our people and devastates our land.

We need a radical transformation.

Patronage Politics of the Oligarchies and Violence

As a system, patronage politics is corrupt, unjust, and violent. Although the oligarchies may be bloody competitive against each other regarding issues of wealth-and-power-distribution (what election has been all about), the threat of dismantling their system of patronage politics will surely bring them together to protect their interests as a class. In the face of this threat of losing their corruption-based wealth and power, especially from people outside their network of elite families, these TraPos will join together into a phalanx-like cohesion against the outsiders.

Would there be traditional politicians who would join the people in dismantling patronage politics? Of course. Those are the exceptions though. As a class, TraPos will continue to be the perpetrators of patronage politics. They will have so much difficulties turning away from this system. It’s their source and base of wealth and power. Through many decades, these amassed wealth and established clan power have corrupted them and have become their gods. Within their realm of power, many of them have even manifested their view of themselves as gods. Impunity is one of such manifestations.

Active NonViolence as a Powerful Response

The instinctive response of many against the violence of patronage politics would be violence. But responding to the TraPos with violence only increases their power because they thrive on violence. The violence of injustice will only be exacerbated by the injustice of violence. Violence begets violence.

The power of active nonviolence has been shown in recent history:

People power in the twentieth century did not grow out of the barrel of a gun. It removed rulers who believed that violence was power, by acting to dissolve their real source of power: the consent or acquiescence of the people they had tried to subordinate. When unjust laws were no longer obeyed, when commerce stopped because people no longer worked, when public services could no longer function, and when armies were no longer feared, the violence that governments could use no longer mattered—their power to make people comply had disappeared.

Will we actually rise up as a people and initiate a radical, non-violent social transformation? Will the Evangelical pastors and theologians provide leadership and framework for biblically-based social ethics towards this new wind of national transformation?

We Need to Finish the People Power Movement

In the past, we have started a series of ‘people power movements’. There were EDSA 1, 2, and 3. But it seemed we were good at starting well but we still have to improve on finishing well. Perhaps this time, we may be ready as a Church and as a people to continue the people’s power movement. This time, let’s finish well by dismantling the roots of corruption—the patronage political system as perpetuated by the oligarchies.

As Christian leaders, we can start by praying for President Benigno S. Aquino III to listen to the people — whom he voluntarily referred to as his ‘boss’. Then, we can all work together to advocate for the following:
1. Abolish the pork barrel system.
2. Reveal, investigate, and prosecute pork barrel scammers — past and present.
3. Pass the Freedom of Information Act.
4. Dismantle the patronage political system of the oligarchies.

And for our immediate actions within the Body of Christ, may I suggest the following?

May God wake us up as biblical leaders, as the Body of Christ, and as a nation!

Peace I leave with you; my peace I give you. I do not give to you as the world gives. Do not let your hearts be troubled and do not be afraid.  (John 14:27)

Permanent link to this article: https://waves.ca/2013/11/07/patronage-politics-and-radical-transformation-a-call-to-christian-leaders/