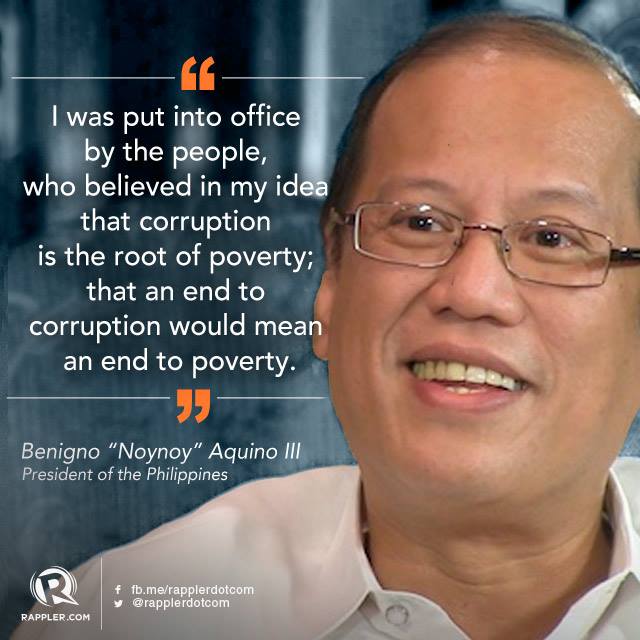 I came across this photo by Rappler — an online news outfit in the Philippines — asking the readers: Do you have any birthday wishes for him?

My wish for President Benigno Simeon Aquino III is to really be sincere in acting out his original ideas against corruption. But he is merely dealing with the symptoms of corruption. I wish he would really deal with the roots of corruption.

I think the Philippine Government is still generally corrupt as a system, even under the administration of President Noynoy or P’Noy. Our government is still controlled by oligarchs and its real system is patronage politics, which is inherently corrupt, sustained by the pork barrel system. This corruption is exacerbated by the oppressive presence of the superpowers in our land who use their military and economic might to exploit our land and people; these powers also manipulate and further corrupt our already corrupt government system.

There are, however, many individual government officials and personnel who are righteous and are advancing justice and peace against the overwhelming powers of the oligarch-controlled patronage political system. Many people in various government agencies and various sectors of our society — business, education, media, religious, security, and civil societies — are working hard to advance genuine transformation. They need our prayers and support.

But we need to act further.

We need to advance an active non-violent, radical, systemic transformation in this land.

I wish that, in his 54th birthday, President Benigno S. Aquino III would really listen to the people — whom he voluntarily referred to as his ‘boss’. I wish he would transcend his filial alignment as one of the oligarch families and actually lead us to accomplish the following:
1. Abolish the pork barrel system, including his.
2. Reveal, investigate, and prosecute pork barrel scammers — past and present, including his party colleagues, whether they might be friends or family.
3. Pass the Freedom of Information Act.
4. Dismantle the patronage political system of the oligarchies.

May God heal us all and help us all!

Permanent link to this article: https://waves.ca/2014/02/08/my-birthday-wish-for-president-benigno-s-aquino-iii/