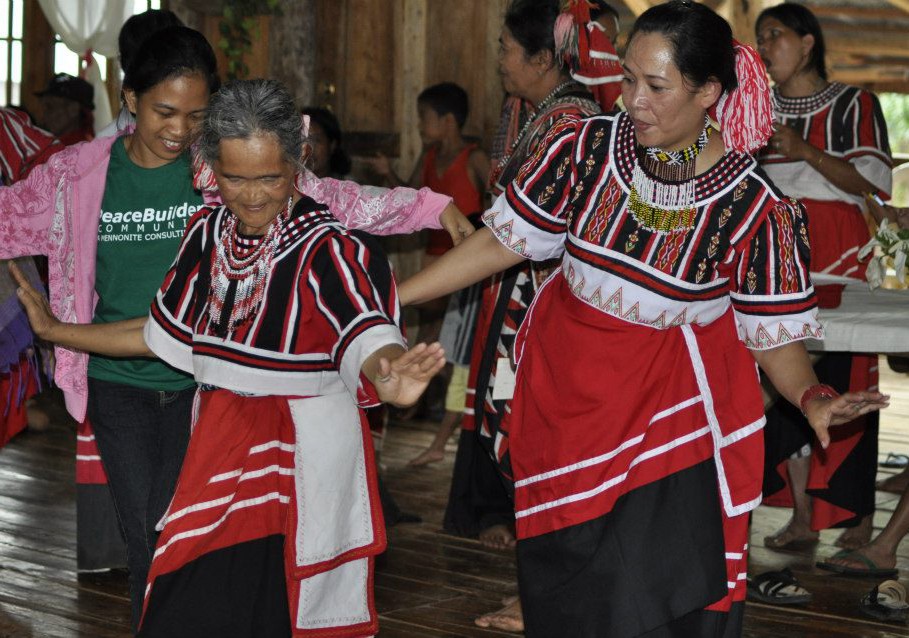 To every thing there is a season, and a time to every purpose under the heaven.
Ecclesiastes 3:1

Forget the former things; do not dwell on the past. See, I am doing a new thing!
Isaiah 43:18

There are overwhelming reasons why Joji and I, along with the whole PeaceBuilders Community, are excited to face the New Year!

New Sceneries. By the invitation of various local and provincial tribal leaders, we will be extending our Peace and Reconciliation (PAR) community development operations in the Kalinga Province. This scenic province will be a major focus of our presence.

PAR Kalinga, although still in its early phase, already has a full schedule in two significant fields. Salome Haldemann, our international staff assigned to focus on this development, reports:

The first field is the preservation of the indigenous traditions and culture.  Among the main riches of the Cordilleras are the presence, culture and history of their indigenous people. The Kalingas have customary peace processes, traditions of hospitality and solidarity, and a strong relationship with the spiritual world. But they are disregarded by the mainstream lowland culture. In the minds of many Filipinos, the Kalinga’s history of head hunting is highlighted because of cultural prejudice. Lowlanders tend to turn this exceptional practice as if this is the Kalinga’s only characteristic. 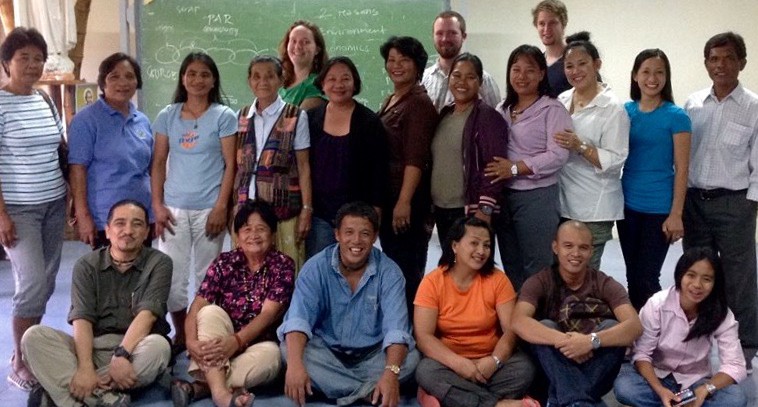 The second field of work for PAR Kalinga is seeking to help in the transformation of the political, economic and social injustices in the Cordillera Region. The Cordilleras are full of natural resources, but have been one of the poorer provinces of the Philippines for years. Their riches—gold mines, forests, pure spring water, streams—are drained for the good of the Manila-based central government. However, the Cordillera’s provinces reportedly receive less funding from the government than all the other provinces in the Philippines. A promise of autonomy for the Cordilleras had been negotiated in 1986, after years of fighting from the Cordillera People’s Alliance – Cordillera People’s Liberation Army (CPA-CPLA) but the government now considers the agreement closed, after what CPA regards as foul play. Tension is strongly felt by those who fought for autonomy, and PAR Kalinga has been asked to help in advocating for the cause.

For our community, this would be a new challenge in a new horizon of conflict transformation.

We will be anticipating, with much excitement, how this revolutionary-force-turned-political-party would help transform the electoral horizon of Mindanao as they prepare in 2015 to participate in the 2016 elections.

New Mountain. We will be establishing a new model farm for arabica coffee in Kapatagan, a community at the foothills of Mount Apo. Coffee For Peace will be acquiring an 8000-square meter property from our friend and fellow peace advocates — Edwin and Inday Arcenas. We will soon be working together in advocating Peace and Reconciliation (PAR) principles and to plant Arabica coffee together in this mountain range (1000+ meters above sea level), applying our Coffee For Peace advocacy.

New Depth. As we are getting deeply immersed in divided communities because of unresolved conflicts, the more we are becoming aware of the need for inclusive economic development as a critical aspect of our peace and reconciliation mission.

In the past few months, we have been actively participating in an inclusive growth movement in Mindanao being spearheaded by the Central Mindanao University (CMU). Much of our time in 2015 will be strategically invested in developing inclusive growth and development with our CMU partners. We are going to further develop a new social business enterprise called Sidlak Kalinaw. 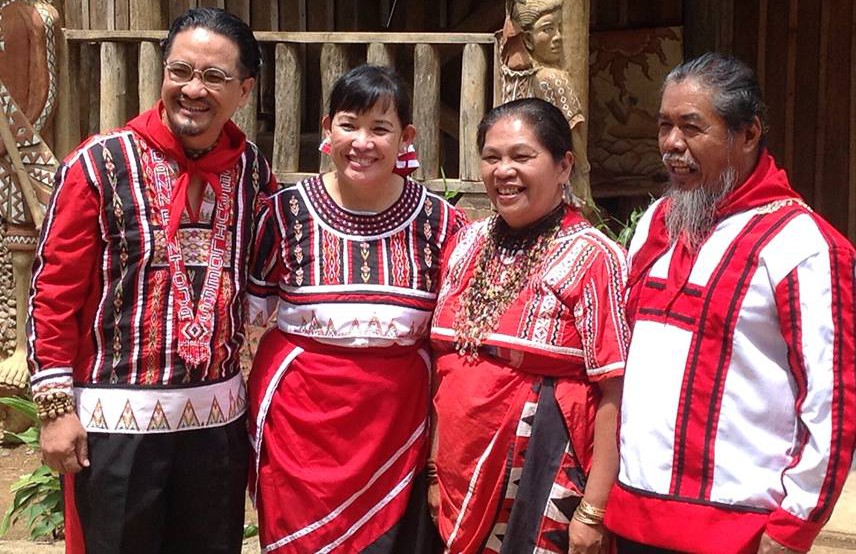 Posing for photo with Bae Lisa and Datu Migketay Saway

New Heights. The growing relationship between PBCI and the key leaders of Indigenous People is helping our peacebuilding advocacy reach a new level of effectiveness in the area of conflict transformation.

Last year, a group of scientists and researchers from CMU entered Mount Kitanglad to study certain plants for medicinal purposes. The Cultural Guards of the Talaandig Tribe patrolling the forests arrested the researchers who entered the tribal territory without permission from the tribal council. Past issues and deep wounds immediately re-surfaced.

Our PAR team in Bukidnon were invited by Datu Migketay ‘Vic’ Saway — the spiritual leader of the Council of the Seven Tribes in Bukidnon — to help in the conflict resolution processes. Both the Talaandig Tribe and CMU executives have agreed to go through a conflict transformation process between them. The two parties have expressed a clear vision of where this long-term process is going. Reconciliation.

As we enter 2015, we will be investing time and resources working on this issue. 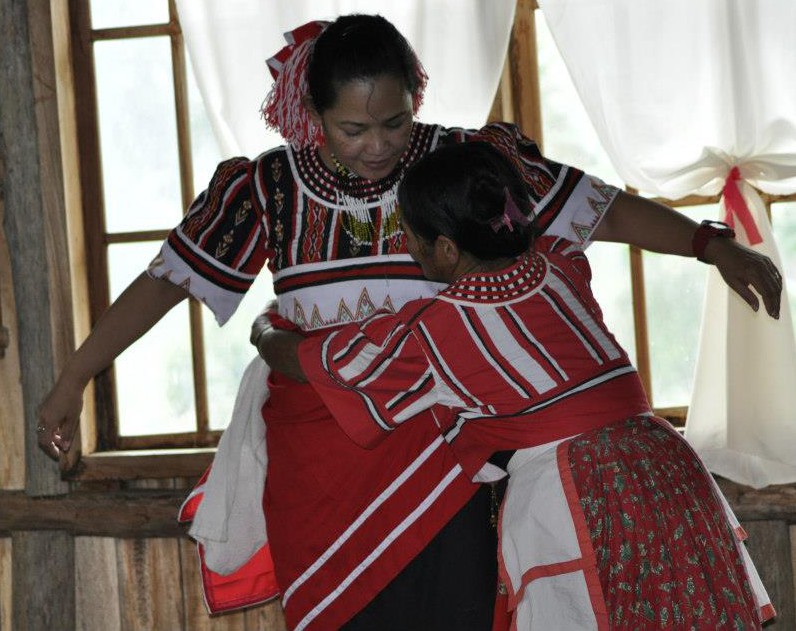 Embraced by our new community: A Talaandig dreamweaver helps Joji wear her new native attire–which was completed after two years of hand weaving and sewing.

New Expanded Family and Community. We have been embraced by certain leaders from both the Bangsamoro and the Indigenous Peoples in Mindanao with their love, hospitality, patience, and mentorship.

We, at  PeaceBuilders Community, have also embraced them with love, expressed through our justice advocacy for their rights as well as through our sincere respect for their culture.

Last October 15th, Jonathan Cranston, one of our international staff, participated in a tribal celebration. He was able to interact with some academic and tribal leaders advocating for the right to self determination of the indigenous peoples in Mindanao. Here’s a segment of his report:

This struggle for official recognition of traditional tribal homeland is the experience of many in the indigenous community, says Prof. Sharon Bulaclac, a faculty member at Mindanao State University and a consultant for PeaceBuilders, Inc. who attended Talaandig Day with the PeaceBuilders Team. According to Prof. Bulaclac, government administrators at both the local and national levels often have ties to corporations whose profits would suffer as a consequence of official recognition of tribal domain claims. The Indigenous Peoples’ Rights Act of 1997 is ostensibly in place to protect tribal rights to tribes’ ancestral lands. Nonetheless, says Prof. Bulaclac, “even though the law is there, sometimes they will pretend that the law is invisible.” The datus (chiefs) of the Panalan Higaonon tribe, who also attended Talaandig Day, made the same assertion as Prof. Bulaclac. They told me that though IPRA is on the books, it is not enforced, and they feel that Mindanao’s Lumad peoples lack recognition and are disrespected.

Another international staff member, Arthur John Block, shared his observation on the communal spirituality of the Talaandig Tribe:

We entered the hall and were surprised to see it full of people. Despite the gorgeous art on the walls, to the school groups and other curious but respectful spectators, the center of attention in the second floor of the two-storey Hall of Peace was the ceremony taking place. A joyful and smiling Talaandig leader was drawing drips of water from a jar with a piece of a banana leaf and anointing the infants and toddlers brought forth by their parents, welcoming and dedicating them into the community; as this was happening, a table of tribal leaders prayed passionately with their hands outstretched toward the children. The colors, the smiles, and the positive reverence displayed by all involved illustrated the beauty – both aesthetic and spiritual – of this tribal community.

The year 2015 will be decisive as we directly advocate for the IP’s right to self determination in several specific cases. One of which is walking with our Dulangan Manobo sisters and brothers. Even as we commit to this, we humbly keep in mind that we are not here to simply help. We are here to bind our lives with the oppressed. Their liberation is our liberation.