A MAMASAPANO WOMAN CALLS OUT FOR PEACE 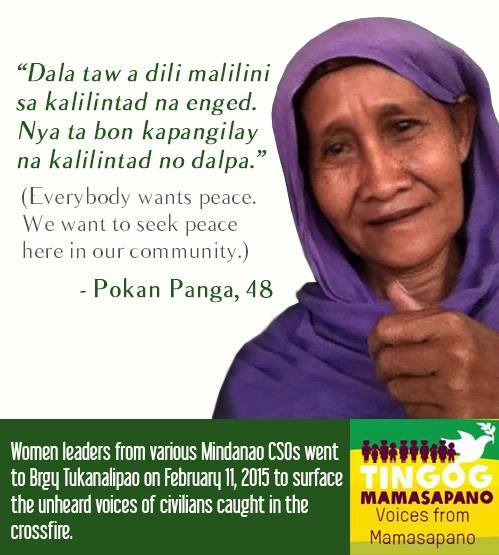 They, too, call out for peace.

A story of a widow, a mother and a civilian caught in the crossfire.‪#‎tingogMamasapano‬ ‪#‎alloutpeace‬ ‪#‎PeaceTayo‬

The day before the incident happened, it was just a normal day for Babu Pokan –a widow and a mother to five. Babu was weaving ikam(mats) since she stopped working at the farm three years ago. Her body could not do it anymore. She sells the single mat for 30 pesos in their market. No hint or feeling that something is going to happen as what she had told us.

At the early dawn of January 25, 2015, she was sleeping when she suddenly heard firing. She wasn’t certain what time it was, but she said that it was early in the morning and people were still sleeping. Fear immediately clouded in her and she instinctively packed her belongings. With all the adrenalin rushing in her, she was able to lift heavy things. She couldn’t imagine capable of doing that on a normal setting. Together with her 2 children, they rushed outside their house. With no where to go, they just stayedfell asleep along the highway. Babu Pokan said they weren’t able to eat up until noon. They didn’t know what to do because they didn’t have any clue what just happened. They were all afraid, hungry and disoriented. This was the worst thing that ever happened in Tukanalipao according to her. :

They were able to go home at around night time. Since the incident, it has been a sleepless and fearful night for them. Many times, with just small sounds or a sound of a vehicle coming they would wake up easily and feel afraid.

It has been 17 days and their lives have not been back to normal. When she tries to weave again for her to sell and to support her family, she couldn’t do it. Her hands are still shaking from what happened. She showed us her old and wrinkled hands. During the interview, she kept on glancing around and looked so anxious. She told us if she hears some blasting whether she’s just imagining or not, it makes her stomach churn.

Babu Pokan said nobody wanted that to happen. Herself, her family and everybody in the community especially the children want peace. The incident cost so much of their livelihood and brought so much pain and fear.

Permanent link to this article: https://waves.ca/2015/02/27/a-mamasapano-woman-calls-out-for-peace/