PBCI-CFP ON DAVAO BLAST: A PEACEFUL DEFIANCE AGAINST TERROR

IN SEARCH OF THE ASIAN WITHIN ME: A PHILOSOPHICAL-THEOLOGICAL JOURNEY 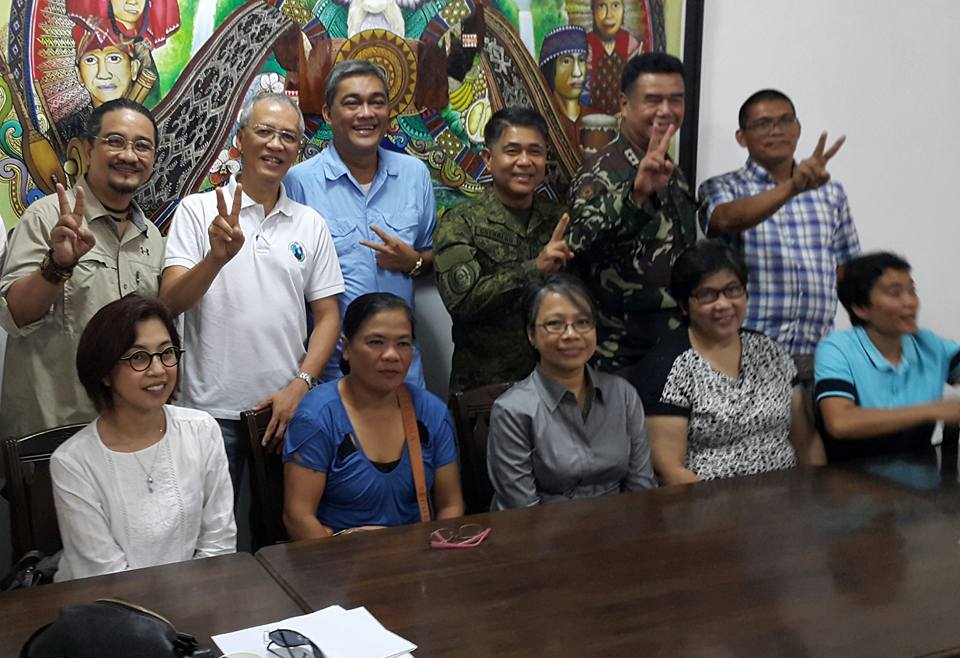 Tuesday, 27 September 2016. The All-Out-Peace network representatives had a meeting with Sec. Hernani Agsalud Braganza — panel member of the Government of the Republic of the Philippines (GRP) supervising the Reciprocal Working Committee on Ceasefire). USec. Braganza was accompanied by Atty. Antonio Arellano (GRP panel member), Lt.Gen. Rey Leonardo Guerrero (Commanding Officer of the Eastern Mindanao Command, AFP), and Maj.Gen. Rafael Valencia (Commanding Officer, 10th Infantry Division, AFP). The meeting was about the civil society’s proposed ceasefire mechanism in the Peace Process between the GRP and the National Democratic Front of the Philippines (NDFP).

The All Out Peace Network eventually submitted the following document to both the GRP and NDFP Peace Negotiating Panels.

Civil Society Statement to the Resumption of the GPH-NDFP Formal Talks
August 20, 2016

After a six-year impasse, the June meeting in Oslo signaled a renewed commitment and gave an overwhelming fresh mandate towards talking peace between the Government of the Philippines (GPH) and the Communist party of the Philippines/New Peoples Army/National Democratic Front (NDFP).

And despite the aborted unilateral ceasefire declarations and the recent heated tussle of positions in social media by the principals, no one yet is throwing the proverbial ‘towel’ – in fact, formal talks will resume days from now with the released NDFP consultants joining the table.

Thus, we, from the civil society, fully support this dialogue momentum and appeal to both parties in conflict to stay the course in recalibrating the talks. And the ‘litmus test’ at the moment is putting into effect the ‘ceasefire imperative’.

We then collectively declare the following principles and perspectives :

A key civil society agenda is the continuing call for inclusivity and community participation in the peace process. Therefore, we respectfully submit the following recommendations for your consideration:

1.  MOBILIZE support towards a more sustainable, jointly-declared ceasefire in the long-run. In the immediate term, panels should clarify the modalities of an “interim ceasefire agreement”.The ceasefire should be community-based and respects existing governance and leadership structures for it to be locally owned. Civil society monitoring will draw mandate from the voices, issues and needs of civilians (non-combatants) and amplify other protection issues in the ceasefire milieu;

2. ADDRESS the issue on ‘representation’ and participation (in terms of concept and process) in the talksespecially for the civil society, IPs and other vulnerable sectors including women and children. While in the midst of an armed conflict situation, we appeal for the full enforcement of civilian protection, recognition of the IP rights over their ancestral domains, and the promotion of “better, protected communities”;

3. URGE the OPAPP, GPH and NDFP panels to institutionalize public participation processesin building consensus around the substantive agenda. We are only able to broaden the peace constituency when the Civilian Agenda is consistently integrated and mechanisms for civilian engagement are made accessible.

4. INTEGRATE a Dialogue Spacein engaging the horizontal and vertical dimensions of conflict in both formal and informal peace processes. Promote a “healing process” that should start in the conflict-affected communities and ancestral domains with the end view of ‘restoring the relationships’ damaged by war;

5. RECOGNIZE the IP participation in the peace process and support their symbolic call for an “IP-Declared Community-based Ceasefire” in relation to the armed conflict between the government and the CPP/NDF/NPA, with the following elements:

We believe that legitimacy is forged from below.  Hence, we, from the civil society and our respective community partners in the conflict-affected communities, will continue to accompany the peace process – in both its high and ebb tides – towards sustaining peace and transforming the future.

The All-Out-Peace Network is being coordinated by the Initiatives for International Dialogue. We, at PeaceBuilders Community, thank Gus Miclat and Lyndee Prieto for their leadership in this endeavor.

Permanent link to this article: https://waves.ca/2016/09/28/pbci-joins-all-out-peace-network-in-its-ceasefire-mechanism-proposal/