BONIFACIO DAY, GENUINE LAND REFORM, AND THE GOSPEL OF PEACE 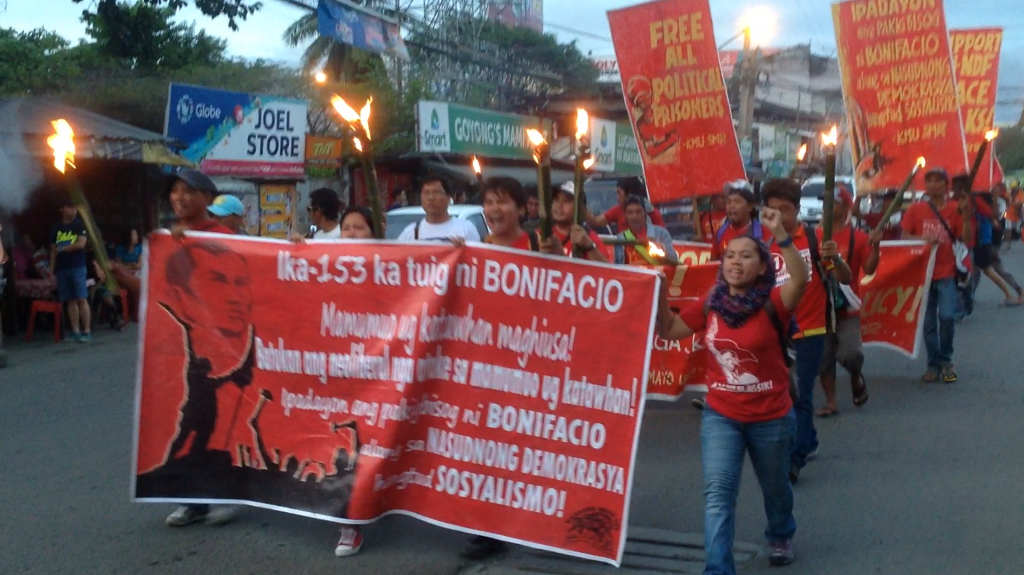 This afternoon, I celebrated the 153rd birthday of Gat Andres Bonifacio — the founder of our people’s revolution against the oppressive Spanish and American colonial rule. I walked with, and listened to, a major people’s movement who have been consistently fighting for the liberation of our country from US imperialist militarization, and from the exploitative presence of neo-liberal economic policies that corrupt our government, impoverish our people, and destroy our environment.

Although I do not agree with the use of armed struggle in advancing radical transformation, I love and respect these people who are sticking their necks out for the justice and peace that our people have been seeking for centuries.

One of the consistent cry of our people is genuine land reform:

Implement land reform as a matter of democratic right and social justice, as the foundation of economic development and as a method of liberating the landless tillers, releasing capital, promoting rural development and creating a domestic market.

The accumulated rent paid to the landlords for many decades by a majority of the people, the landless tillers, has long paid so many times over for the market value of the land. This social injustice must end. Through land reform, the landless tillers achieve economic, social, political and cultural liberation. Land reform brings about the substance of democracy among the peasant masses who comprise the majority of the people.

As a result of land reform, the domestic market is expanded because of the increased income of the peasants. Capital is released instantly for industrialization if half of the compensation to the landlords is in the form industrial bonds invested in certain industries. The peasants can assure the people of adequate food supply and raw materials for food, chemical and other types of manufacturing. Rural development can be achieved by developing cooperative and integrating agriculture, animal husbandry, fishery, forestry, handicrafts and rural industries.

How can we have genuine land reform when the institutional church owns most of the best arable lands and commercial real estate properties in this country, second only to the government? And most, if not all, of these lands were acquired through violent, oppressive colonial claims, misusing the name of Christ! This religious land grabbing was done using a religious and globally-propagated lie called The Doctrine of Discovery. This doctrine was the basis of the current legal framework of land ownership called The Regalian Doctrine.

And here we are, missionaries of the Gospel or the Good News, preaching the Peace of Christ among impoverished rural folks struggling to get rid of this oppressive land ownership perpetuated by local landlords — who are also the political dynasties in most provinces, who are also well-represented in our legislative processes and executive offices of the government.

It takes a lot of repentance and humility on our part as people of the church to really be consistent with the message of the Gospel. And yet, most church people still thinks that the church is solely for the purpose of saving souls from hell, for individualistic consumption of a certain ‘spiritual high’ needed after a hellish week at work, at school, at home, at play; for many of the church people, social concerns, like land ownership, will have to be left in the hands of the government, non-government organizations, and corporations.

This, for us, is Good News.

Permanent link to this article: https://waves.ca/2016/11/30/bonifacio-day-genuine-land-reform-and-the-gospel-of-peace/