I’M SO ENERGIZED BY THE DEDICATION OF MY PEACEBUILDING COLLEAGUES

OUR MINDANAO PAR TEAM ENJOYED BEING TOGETHER IN A LEARNING CONFERENCE 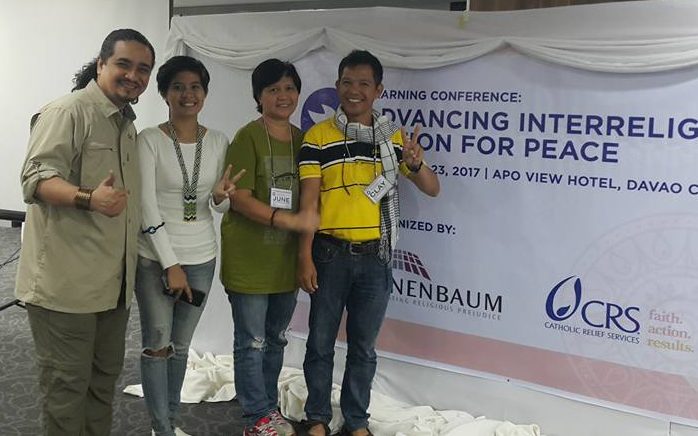 This learning conference is so enriching — intellectually, spiritually, psycho-socially.

It was great to have a chance chatting one-on-one with Pastor James Wuye. The story of Imam Muhammad Ashafa and Pastor James Wuye was told in a movie The Imam and the Pastor, which is widely used in Christian-Muslim inter-faith dialogue.

I’m also grateful for Clay, June, and Sihaya — our regional team leaders in advancing Peace and Reconciliation (PAR) in Mindanao.

We’re extra-blessed to get to know Abel and Gimaidee better; Abel is June’s younger brother.

RATIONALE
Since 2010 there has been an increase in the number of violent global conflicts, with 19 all out wars and 43 high-scale conflicts reported in the last year. The conflicts have also become more deadly, killing 180,000 people in 2015 and making another 60 million refugees, internally displaced persons, or asylum- seekers. The current international reality makes clear that war has a growing momentum over the prospect of peace. War results in a dismantled identity, requiring a response that humanizes both the other and ourselves. Dialogues between divergent religious groups have the potential to serve as a unifying force between seemingly contrasting viewpoints and approaches. Religion is a foundational component of society, shaping the cultural, political and economic realities of a people. Prominent religious leaders have acknowledged that world peace is only possible if the two largest faith groups, Muslims and Christians, reconcile with one another through conversation. However, in the past two decades religion has been found to be at the center of most violent conflicts around the world. Violence perpetrated by groups that manipulate religion and religious identity is a major security challenge at the global, national and local levels. Amid the challenge of violent extremism, there had also been an increase in multi-religious collaboration among faith-based actors. Interreligious action and cooperation involve multi-dimensional approaches that strengthen community expressions of religion in complementation with social, political and economic affairs to promote human dignity and transformation of society. The conference will gather together religious and spiritual leaders, dialogue practitioners and peacebuilders from different regions of Mindanao. Participants will reflect together with two renowned religious peacebuilders from Nigeria- Imam Muhammad Ashafa and Pastor James Wuye on practices, challenges and lessons in interreligious peacebuilding. The organizers believe that this gathering will help galvanize faith-based approaches in peacebuilding. The shared learning process is envisioned to affirm shared values and commitment of religious peacebuilders to demand justice, foster solidarity and sustain peace amidst the continuing challenges of conflicts and violence in the region.

Permanent link to this article: https://waves.ca/2017/08/24/our-mindanao-par-team-enjoyed-being-together-in-a-learning-conference/