I REITERATE MY PROTEST AGAINST THE WESTERN BOMBING OF SYRIA

LIVING THE ‘KINGDOM ETHICS’ AND BEING LIBERATED FROM FEAR-ORIENTED OUTLOOK

CELEBRATING AND UNDERSTANDING THE UNIFICATION OF NORTH AND SOUTH KOREA 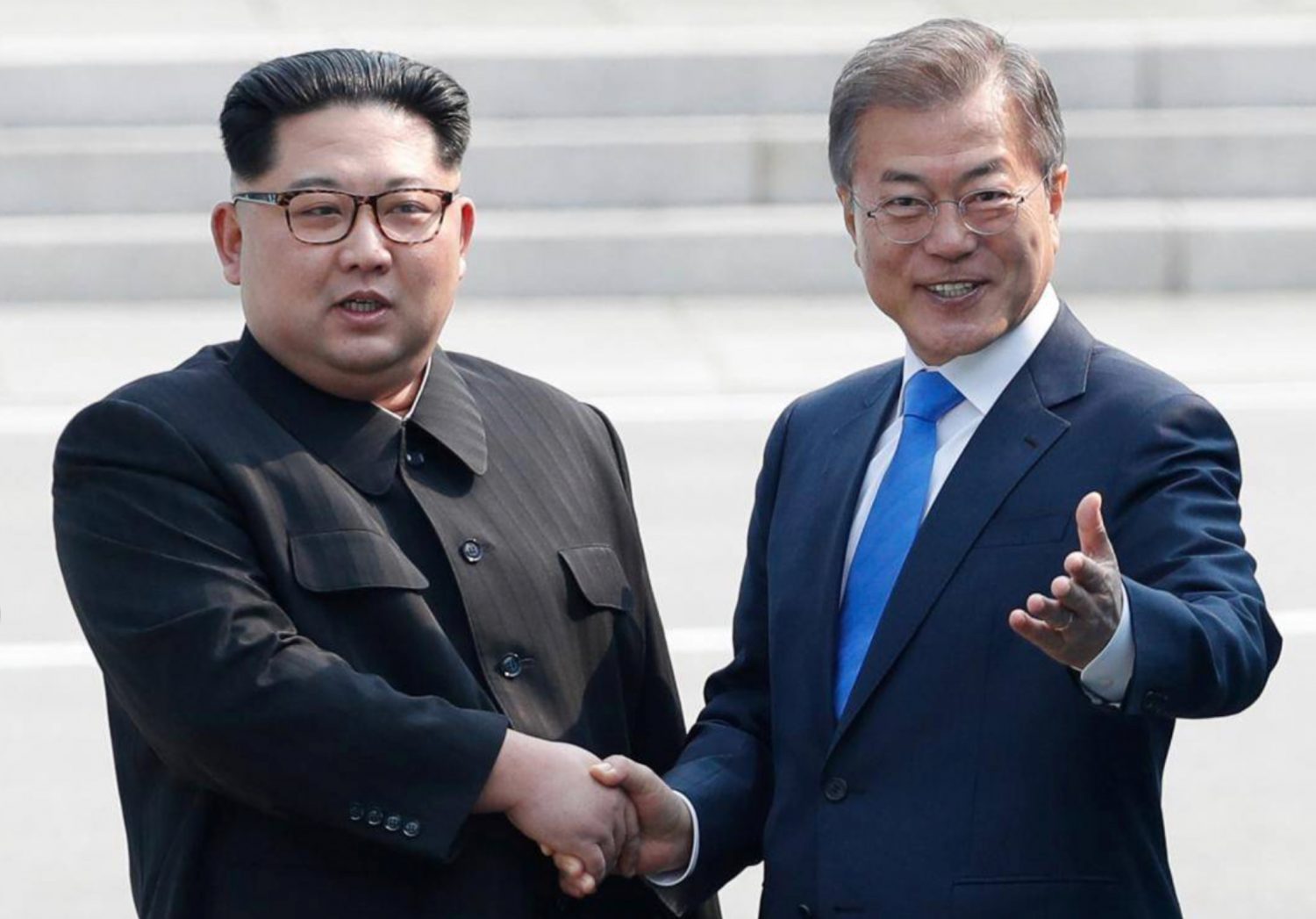 We’re happy that North and South Korea are about to begin their unification process! We applaud the persistent effort of the South Korean government to make this inter-Korean summit a successful event. “Since his inauguration in May 2017,” a Hankyoreh editorial stated, “Moon has continually made overtures of peace to the North.” We are also excited to hear more from the North Korean government how they would proceed with this peace and reconciliation process. NK News quoted Kim Jong-un as saying to Moon Jae-in: “I came here with the determination to shoot a signal flare while standing at a starting point of the moment when a new history of the inter-Korean relations, peace and property, is written.”

Along with all the Koreans and the rest of the world, we celebrate the first steps towards the reunification of North and South Korea — with critical set of lenses.

Looking at this wonderful event from a geopolitical perspective, a part of our inner being is lamenting. The major reason why the United States and the Western nuclear powers are forced to recognize Pyongyang is that, North Korea is now a new nuclear power. North Korea’s “completion of state nuclear armament,” according to a major Korean newspaper, had established a “balance of power” with Washington. And Kim Jong-un actually said: “A nuclear test site would be closed and ‘dismantled’ now that the country has learned how to make nuclear weapons and mount warheads on ballistic rockets”.

North Korea did not agree to mutual denuclearization as Donald Trump claims. Here’s how Matt Kwong, an analyst at the Canadian Broadcasting Corporation, puts it:

To Western powers, denuclearization would mean nothing short of a complete and irreversible dismantling of the North’s nuclear program. Conventional wisdom says that won’t happen, as a nuclear deterrent is viewed as vital to the regime’s survival, described in propaganda over the weekend as a “treasured sword.”

To Pyongyang, though, denuclearization is interpreted as applying to the entire Korean Peninsula, including the withdrawal of American troops from South Korea and the removal of the U.S. “nuclear umbrella” alliance with Seoul. 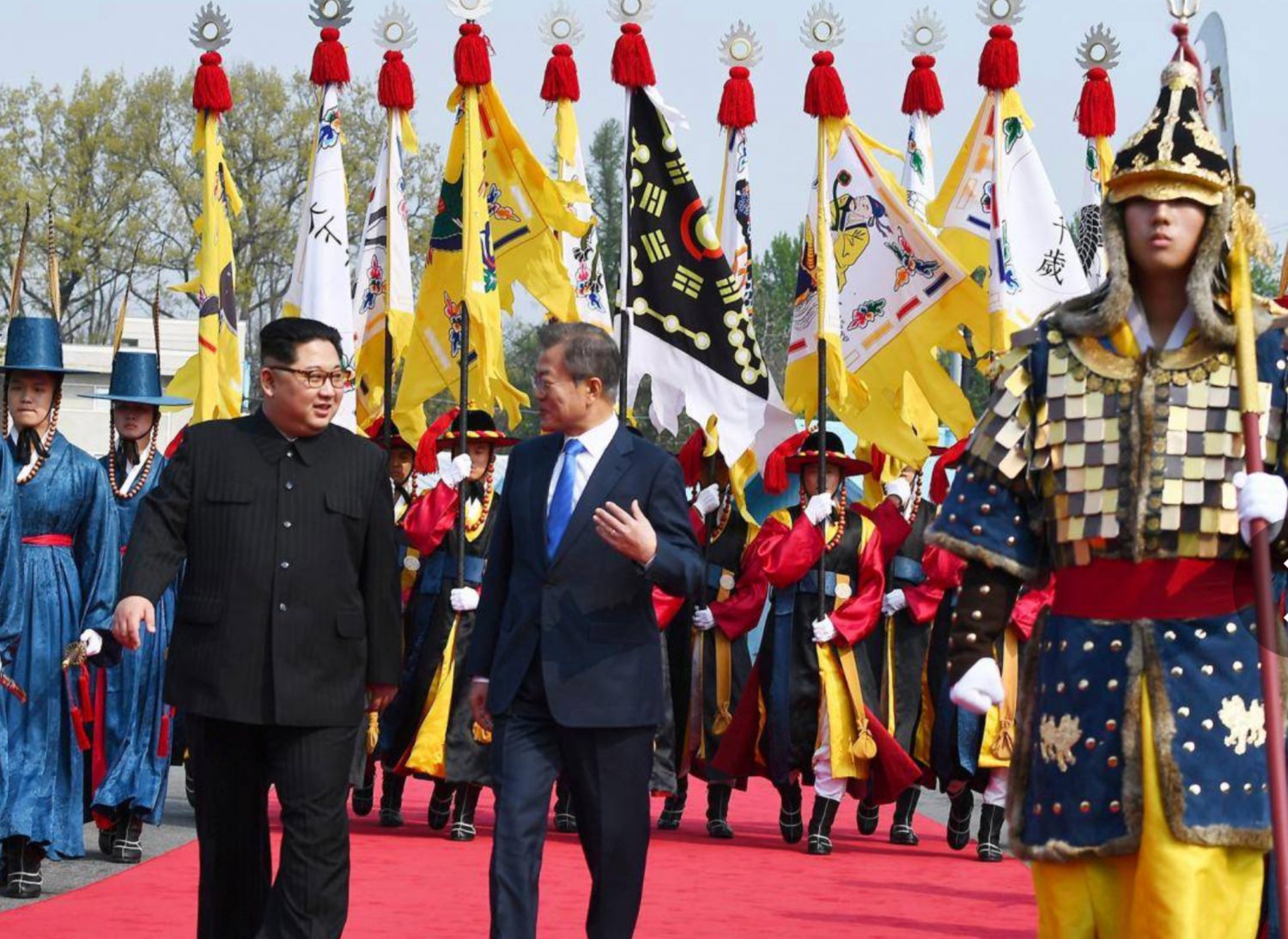 In this world, the sad reality is that a country has to have nuclear power capability to earn some sort of respect. It’s all about nuclear deterrence. A geopolitical think-tank group understand nuclear deterrence this way:

The strategic concept of deterrence aims to prevent war. It is the justification virtually every nuclear state uses for maintaining nuclear arsenals… The concept of nuclear deterrence follows the rationale of the ‘first user’ principle: states reserve the right to use nuclear weapons in self-defence against an armed attack threatening their vital security interests. Possession of nuclear weapons could be seen as the ultimate bargaining tool in international diplomacy, instantly giving any nuclear state a seat at the top table.

Let’s dance, eat and drink with Planet Earth for this event! This is an exciting new beginning! Let’s join the people of the Korean peninsula in celebrating this achievement. Let’s be grateful for the fact that Moon Jae-in, the President of the Republic of Korea and Kim Jong-un, State Affairs Commission Chairman of the Democratic People’s Republic of Korea are now in a peace dialogue.

But let’s continue to pray, hope and work toward genuine peace based on truth-and-love, justice-and-mercy. Let us keep pursuing the kind of peace that is beyond mere nuclear deterrence. Let us pursue salaam-shalom.

Panmunjom Declaration for Peace, Prosperity and Unification of the Korean Peninsula 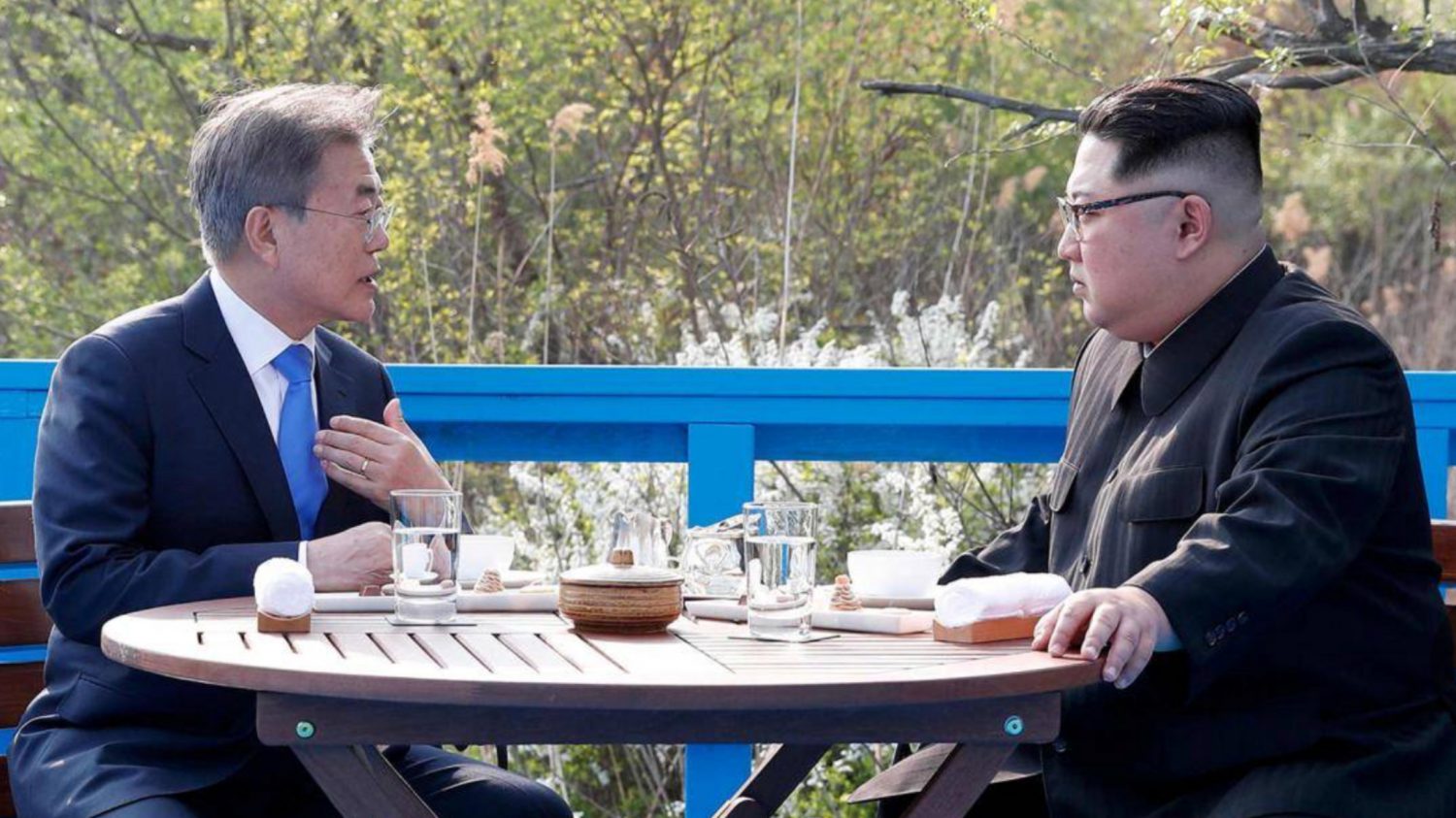 During this momentous period of historical transformation on the Korean Peninsula, reflecting the enduring aspiration of the Korean people for peace, prosperity and unification, President Moon Jae-in of the Republic of Korea and Chairman Kim Jong Un of the State Affairs Commission of the Democratic People’s Republic of Korea held an Inter-Korean Summit Meeting at the Peace House at Panmunjom on 27 April, 2018.

The two leaders solemnly declared before the 80 million Korean people and the whole world that there will be no more war on the Korean Peninsula and thus a new era of peace has begun.

The two leaders, sharing the firm commitment to bring a swift a swift end to the Cold War relic of longstanding division and confrontation, to boldly approach a new era of national reconciliation, peace and prosperity, and to improve and cultivate inter-Korean relations in a more active manner, declared at this historic site of Panmunjom as follows:

1. South and North Korea will reconnect the blood relations of the people and bring forward the future of co-prosperity and unification led by Koreans by facilitating comprehensive and groundbreaking advancement in inter-Korean relations. Improving and cultivating inter-Korean relations is the prevalent desire of the whole nation and the urgent calling of the times that cannot be held back any further.

1) South and North Korea affirmed the principle of determining the destiny of the Korean nation on their own accord and agreed to bring forth the watershed moment for the improvement of inter-Korean relations by fully implementing all existing agreements and declarations adopted between the two sides thus far.

2) South and North Korea agreed to hold dialogue and negotiations in various fields including at high level, and to take active measures for the implementation of the agreements reached at the Summit.

3) South and North Korea agreed to establish a joint liaison office with resident representatives of both sides in the Gaeseong region in order to facilitate close consultation between the authorities as well as smooth exchanges and cooperation between the peoples.

4) South and North Korea agreed to encourage more active cooperation, exchanges, visits and contacts at all levels in order to rejuvenate the sense of national reconciliation and unity. Between South and North, the two sides will encourage the atmosphere of amity and cooperation by actively staging various joint events on the dates that hold special meaning for both South and North Korea, such as 15 June, in which participants from all levels, including central and local governments, parliaments, political parties, and civil organisations, will be involved. On the international front, the two sides agreed to demonstrate their collective wisdom, talents, and solidarity by jointly participating in international sports events such as the 2018 Asian Games.

5) South and North Korea agreed to endeavour to swiftly resolve the humanitarian issues that resulted from the division of the nation, and to convene the Inter-Korean Red Cross Meeting to discuss and solve various issues including the reunion of separated families. In this vein, South and North Korea agreed to proceed with reunion programmes for the separated families on the occasion of the National Liberation Day of 15 August this year.

6) South and North Korea agreed to actively implement the projects previously agreed in the 04 October, 2007 declaration, in order to promote balanced economic growth and co-prosperity of the nation. As a first step, the two sides agreed to adopt practical steps towards the connection and modernization of the railways and roads on the eastern transportation corridor as well as between Seoul and Sinuiju for their utilisation.

2. South and North Korea will make joint efforts to alleviate the acute military tension and practically eliminate the danger of war on the Korean Peninsula.

1) South and North Korea agreed to completely cease all hostile acts against each other in every domain, including land, air and sea, that are the source of military tension and conflict. In this vein, the two sides agreed to transform the demilitarised zone into a peace zone in a genuine sense by ceasing as of 2 May this year all hostile acts and eliminating their means, including broadcasting through loudspeakers and distribution of leaflets, in the areas along the Military Demarcation Line.

2) South and North Korea agreed to devise a practical scheme to turn the areas around the Northern Limit Line in the West Sea into a maritime peace zone in order to prevent accidental military clashes and guarantee safe fishing activities.

3) South and North Korea agreed to take various military measures to ensure active mutual cooperation, exchanges, visits and contacts. The two sides agreed to hold frequent meetings between military authorities, including the defence ministers meeting, in order to immediately discuss and solve military issues that arise between them. In this regard, the two sides agreed to first convene military talks at the rank of general in May.

1) South and North Korea reaffirmed the Non-Aggression Agreement that precludes the use of force in any form against each other, and agreed to strictly adhere to this Agreement.

2) South and North Korea agreed to carry out disarmament in a phased manner, as military tension is alleviated and substantial progress is made in military confidence-building.

3) During this year that marks the 65th anniversary of the Armistice, South and North Korea agreed to actively pursue trilateral meetings involving the two Koreas and the United States, or quadrilateral meetings involving the two Koreas, the United States and China with a view to declaring an end to the war and establishing a permanent and solid peace regime.

The two leaders agreed, through regular meetings and direct telephone conversations, to hold frequent and candid discussions on issues vital to the nation, to strengthen mutual trust and to jointly endeavour to strengthen the positive momentum towards continuous advancement of inter-Korean relations as well as peace, prosperity and unification of the Korean Peninsula.

In this context, President Moon Jae-in agreed to visit Pyongyang this fall.

Permanent link to this article: https://waves.ca/2018/04/27/celebrating-and-understanding-the-unification-of-north-and-south-korea/