On Monday, September 13, 2010, I was invited to Celebrate Eid Fit’r 1431 in Malacanang Palace with Muslim leaders and other inter-faith peace advocates, hosted by His Excellency Benigno Simeon Aquino III, President of the Republic of the Philippines. 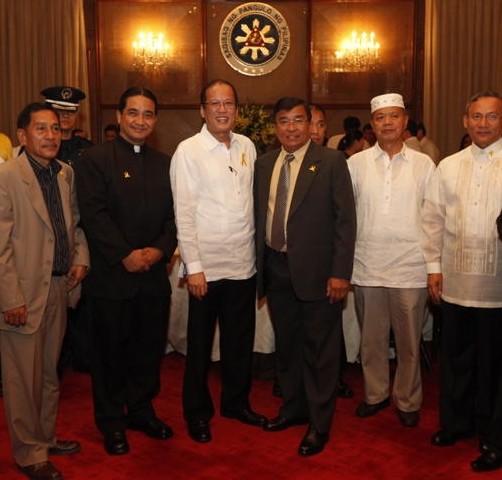 Until now, I have no clue how my name got included in the list of those who were invited. When I received the invitation from the Office of the President, I felt honored and, with so much excitement, gladly accepted it.

But that’s not the point of my story.

This is about my enthusiasm about the peace policy of my country’s President.  I barely touched my food—excellent food, by the way—because I got so excited with what he was saying.

His message was very similar to his speech last September 1st, 2010, celebrating the National Peace Consciousness Month.  He started by revisiting various landmarks in our journey as a nation as we pursue just-peace:  “We hark back to the peace accords that we forged with the Cordillera People’s Liberation Army twenty-four years ago and with the Moro National Liberation Front fourteen years back. Each year in this month, we celebrate these and other notable breakthroughs while rekindling our fervour to build a more peaceful and progressive society. And as we recall the milestones, we acknowledge the people—from within government or without—who have been the driving force in our journey towards peace.”

During the course of that presidential dinner, he kept mentioning the theme for this year’s peace celebration: “People Power at the Heart of the Peace Process.”  I like what he said: “I believe that all the triumphs that we have achieved would not have been possible if not for the concerted efforts of peace advocates from the communities, from friends in civil society, and from the common, compassionate Filipino who believes in equality, good will, and the power of positive discourse. Their solidarity demonstrated through active involvement in the dialogues, consultations, and other spaces for peace has provided us a staunch brace to sustain our work for peace and development.”

And of course, he said his favorite campaign statement: “Kayo ang aking boss” (You are my boss.)  This time, he said it in the context of describing the role of the people in the coming peace talks with the Moro Islamic Liberation Front (MILF) and the Communist Party of the Philippines, the New People’s Army, and the National Democratic Front of the Philippines (CPP-NPA-NDFP): “The peace process is for you and should be by all of us. As long as we have ownership of it, our collective voices will continue to reverberate for peace. We will ensure that these will be heard through responsive governance.”

Responsive governance!  This phrase made my day!  I enjoyed that phrase more than the excellent food in Malacanang Palace that evening.

I’m one of those peace workers on the field who have seen people whom the President described as “people… shackled not only by violence, but also by the insecurity, cynicism, and paralysis that arises from violence.”

President Noynoy (P-Noy) seems to really have embarked on a “journey of transformation.”

I believe he is sincere.  Sincerity is a very good start.  But we need to see his volitional acts as a leader of our nation.  He must have the political will to implement those beautiful words, especially in the midst of global and local forces, many of them motivated by greed and power, who might derail the people’s aspiration for genuine and lasting peace.

I promise to pray for my President everyday—for the sake of the people and of this beautiful land that I love so much.

Permanent link to this article: https://waves.ca/peace/peace-negotiations/