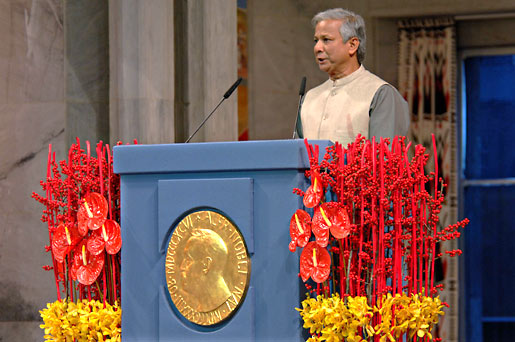 This is the main idea communicated by Muhammad Yunus, the founder and chairman of Grameen Foundation, when he accepted the Norwegian Nobel Prize last Sunday, November 28, 2010:

By giving us this prize, the Norwegian Nobel Committee has given important support to the proposition that peace is inextricably linked to poverty.

Poverty is a threat to peace.

The millennium began with a great global dream. World leaders gathered at the United Nations in 2000 and adopted, among others, a historic goal to reduce poverty by half by 2015.

Never in human history had such a bold goal been adopted by the entire world in one voice, one that specified time and size.

But then came September 11 and the Iraq war, and suddenly the world became derailed from the pursuit of this dream, with the attention of the world leaders shifting from the war on poverty to the war on terrorism. ’Til now, over $530 billion has been spent on the war in Iraq by the USA alone.

I believe terrorism cannot be won by the military action. Terrorism must be condemned in the strongest possible language. We must stand solidly against it and find all the means to end it. We must address the root cause of terrorism to end terrorism for all time to come. I believe that putting resources into improving the lives of the poor is a better strategy than spending it on guns.

Peace should be understood in a human way, in a broad social, political and economic way. Peace is threatened by unjust economic, social and political order, absence of democracy, environmental degradation and absence of human rights.

Poverty is the absence of all human rights. The frustrations, hostility and anger generated by abject poverty cannot sustain peace in any society. For building stable peace, we must find ways to provide opportunities for people to live decent lives. The creation of opportunities for the majority of the people—the poor—is at the heart of the work that we have dedicated ourselves during the past 30 years.

The world is facing a hunger crisis unlike anything it has seen in more than 50 years.

There were 1.4 billion people in extreme poverty in 2005. The World Bank estimates that the spike in global food prices in 2008, followed by the global economic recession in 2009 and 2010 has pushed between 100-150 million people into poverty.  (www.bread.org)

Every year, 20 million people die from hunger and hunger-related diseases. This is equivalent to more than 150 jumbo jet crashes daily for a year in which there are no survivors and in which half of the victims were children.

Do you know that for $20 billion, we can provide for the basic nutrition for impoverished children all over the world?

Do you know that for $50 billion, we can provide for safe water and sanitation for all the poor people in the world?

How do we, as followers of Jesus Christ, respond to these challenges as part of our witness?

Permanent link to this article: https://waves.ca/2010/11/28/global-hunger-and-world-peace/