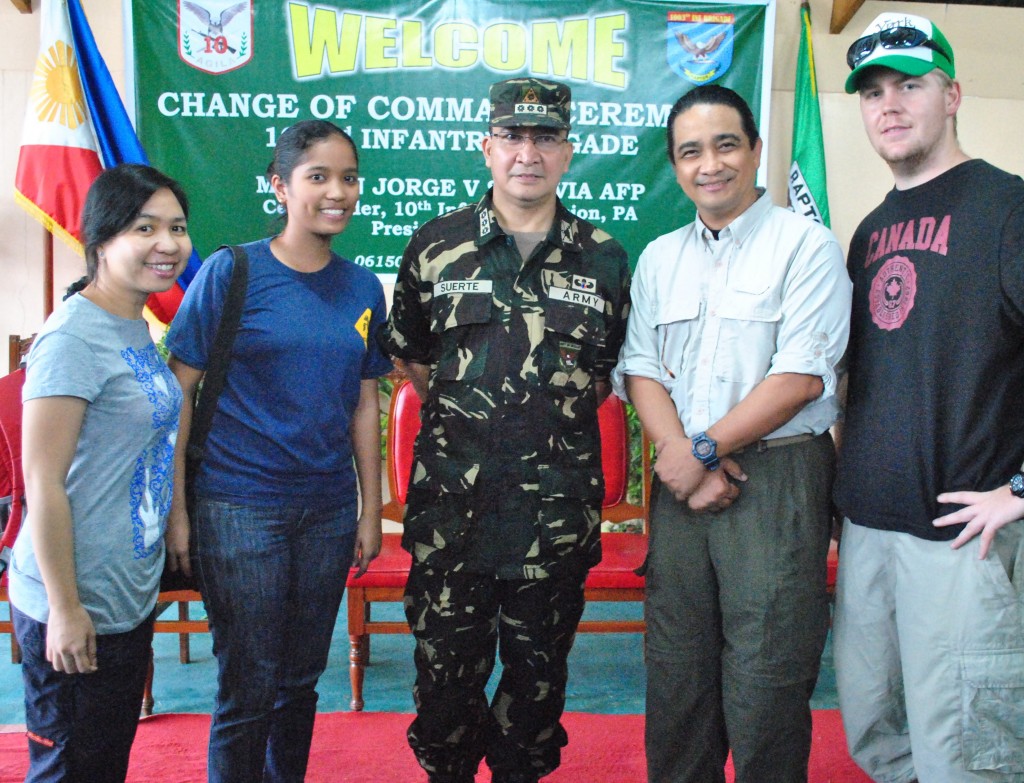 PeaceBuilders Community, Inc. (PBCI) was invited to witness the Change of Command Ceremony at the 1003 Infantry Brigade (10th Infantry Division) of the Philippine Army.  It was held last December 6th, 2010 in the Municipality of Sto. Tomas, Province of Davao del Norte. The new Commanding Officer is Col Lysander Suerte. PBCI and Col Suerte got to know each other on the field and in various military-civilian consultations on issues such as Human Rights and Peace Building.

As part of our Peace and Reconciliation (PAR) ministry among our people in this beautiful land, PBCI is getting more involved in seeing the implementation of the Comprehensive Agreement on Respect for Human Rights and International Humanitarian Law (CARHRIHL) between the Government of the Republic of the Philippines (GRP) and the National Democratic Front of the Philippines (NDFP). Therefore, we are engaging GRP’s Armed Forces of the Philippines in discussing this issue. We hope the NDFP would also allow us to engage with them in this same issue.

Our PBCI Staff have been actively participating in various consultations on Security Sector Reform in the past two years. As an initial national-level culmination of all the field consultations that were happening on the ground, PBCI has been invited to participate in the 1st AFP Conference on Human Rights and International Humanitarian Law on December 17, 2010 at the AFP Commissioned Officers Club House, Camp General Emilio Aguinaldo, Quezon City from 8:00 AM to 2:30 PM. The stated goal of the Conference is “to deepen understanding of how to create a culture of human rights in the AFP by gaining insights and receive practical strategies for action from national leaders and institutions and civilian groups.”