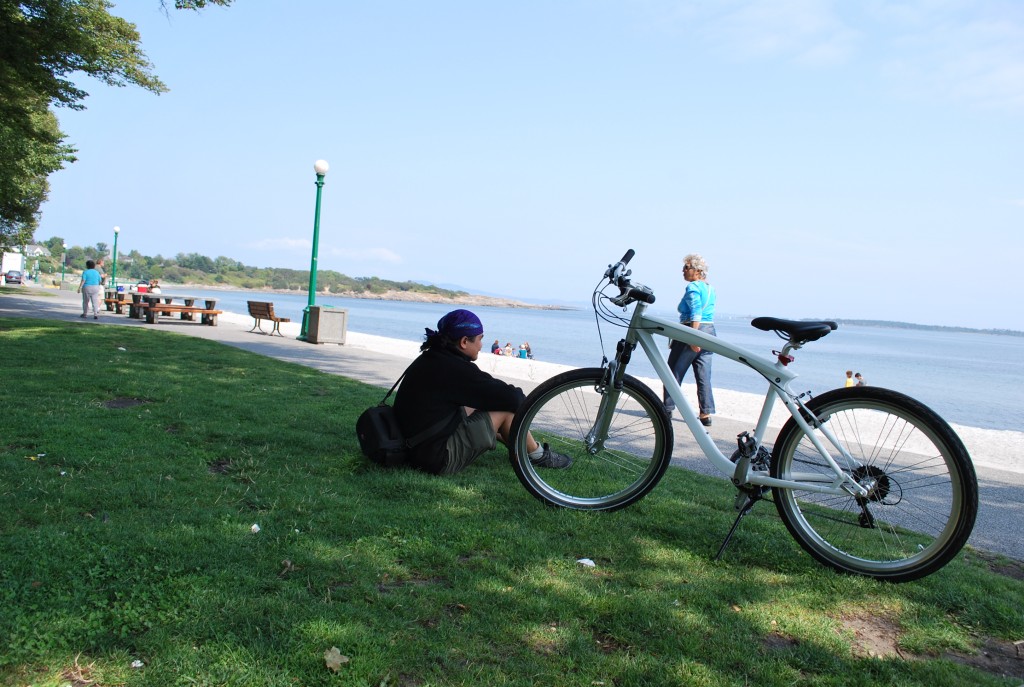 by Dann & Joji Pantoja, Richmond, British Columbia
Written during those scary days of wrapping up our Canadian life–leaving behind our children, grandchildren, friends, respective careers, and the lifestyle we’ve enjoyed for 20 years–to start a new life in Mindanao, Philippines.  Summer 2005.

“In those days and at that time I will make a righteous Branch sprout from David’s line; he will do what is just and right in the land.”(Jeremiah 33:15)

If we will focus on God, then hope is possible, even when events around us seem to be hopeless.  That’s easy to say.  But the current global and national realities and my personal experiences don’t seem to show much hope!

Think of the common Palestinians right now, both Christians and Muslims, who are experiencing oppression at the hands of Israeli military personnel.  Some of those military operatives believe that the God who made this promise to Jeremiah condones their oppressive acts!

Listen to the cry of the common Filipino laborer who makes 300 pesos a day, struggling constantly to provide the basic necessities for his family.  Imagine how they feel when they see other Filipinos spend the same amount for two Caramel Machiattos in a nearby Starbucks coffee shop.

Christians love to read Jeremiah 33:15, “In those days and at that time I will make a righteous Branch sprout from David’s line; he will do what is just and right in the land.”  We immediately identify this passage as referring to Jesus.

I personally believe this verse applies to Jesus Christ.

But consider the words of a 72-year old Rabbi who is helping me understand the Hebrew Bible:  “Daniel, I get nervous every time I hear Christians apply the messianic passages of the Hebrew Bible to Jesus.”

He looked outside his window.  He stared upon the sky as if watching an invisible screen.  It was a cold and rainy day.  He took a deep breath and touched me.  Then his eyes, full of sadness and mercy, assured me of our friendship.  His soft and unapologetic voice brought shocking vibrations throughout my body: “My brothers and sisters died at the hands of the Nazis during the Holocaust.  There were signs along the way that says: ‘You are being killed in the name of Jesus Christ.’”

That became a crisis to me.  Not a crisis of faith.  It was a crisis of anger.  Jesus was misrepresented.  Jesus’ name was misused to inflict unjust sufferings and death to the people who was used by God to proclaim the message of hope, justice and righteousness!

There are still many seemingly religious people who misuse and abuse hope-statements from the Word of God to justify their unjust acts.  They use Jesus to sell products, to promote businesses, to advance selfish aspirations, etc.

Is it really possible to live with Hope, Justice and Righteousness as followers of Jesus in a postChristian 21st Century?

I invite you to meditate on God’s self-revelation through the Prophet Jeremiah.  My prayer is that, God would touch you in a very personal and experiential way through The Word.  The people who are genuinely touched by God are people who live in accordance with the character of God.  They model God’s Hope, God’s Justice and God’s Righteousness.

The ancient Hebrew people loved to coin terminologies that describe their experiences of God or their understanding of God’s role in their lives.  For example, Abraham called an experience YHWH Yireh (The Lord Provides) after God saw to it that Abraham’s needs was provided.  Jacob called a place Beth-El (House of God) after experiencing God in a dream.  Dani-El means “God is my Judge” as far as the Prophet Daniel was concerned.

Following that ancient Hebrew tradition, let us focus on God according to the 33rd chapter of Jeremiah:

GodCredential. The Name is YHWH, who formed and established the earth (v. 2).  We live on this planet Earth.  It is but one of the planets in the Solar System.  Our Sun is but one of the billions of stars across our galaxy.  The Milky Way, our particular galaxy, is just one of the billions of galaxies across the Universe.  Recent theories even state that, there may be parallel universes.  Our cosmic understanding based on modern science humbles my mind.  This humbled mind helps me to realize that my understanding of life and reality is so finite.  If the whole creation is so infinite, how much more is the infinity of The Creator?

Jeremiah’s cosmic understanding may be less sophisticated than our 21st century astronomy.  His understanding of the whole cosmos may consist of a flat surface of land and bodies of waters.  The ends of the earth in their minds literally meant the end of the flat surface.  A canopy called heaven or sky covered this flat earth.  Beyond the canopy is the abode of God and angels.  Below the flat surface was the abode of the dead.

Human understanding of cosmic reality keeps on growing.  Through God’s mercy and grace, mortals like us are given the privilege of discovering more and more about the nature of God’s creation.  I praise God for the human advances in science and technology that adds to our understanding!  But beware, our understanding will always be finite or limited.

Human understanding of reality–whether premodern, modern, or postmodern–is limited.  Jeremiah invites us to put our hope, not in our understanding of Reality, but to the One Who designed Reality.

GodScape. The Divine perspective of human experiential horizons is beyond human knowledge and understanding (vv. 3-13).  We use the term landscape to describe a horizon before our eyes—ricefields, cornfields, wheatfields, mountains, lakes, dessert, etc.  Our present society—the Information Age—even coined the term Netscape to describe the horizon of the cyberspace.

Human experiential horizons are full of paradoxes.  Jeremiah lived in a city that was to be conquered by the Babylonians.  The year was 585 BCE.  The Babylonian military forces were outside Jerusalem’s city walls.  The city was in crisis.  In that historical setting, God told Jeremiah to buy a land in the city (32:1-12).  He was commanded by God to invest in real estate when the price of land was reduced to zero!  God’s reason?  For Jeremiah to model Hope in the midst of crisis!  In 586 BCE, the Babylonian forces razed Jerusalem to the ground.  The land was destroyed.

The people of Judah experienced Exile.  That was a painful, dark experiential horizon in the journey of that people.  Just before their exile God promised hope: “… I will heal my people and will let them enjoy abundant peace and security.  I will bring Judah and Israel back from captivity and will build them as they were before” (vv. 6-7).

How can God say those words of hope in that kind of historical context?  If I were Jeremiah, would I have trusted God?  Would I deliver God’s message of hope to the people of Judah?

It’s easy to say “Yes” in retrospect.  But we are facing national crises of our own today.  And I have no idea how we can see these events around us through Jeremiah’s Hope.  I do not fully understand GodScape.  That’s why I called it GodScape.  It’s beyond human understanding.  But I am invited to call God, to connect with God, even, or especially, in the paradoxes of my nation’s horizons.

God allowed the people of Judah to experience Exile to bring them out of their ethno-centric, exclusivist conception of God.  Similarly, God allows painful experiences that are beyond our understanding to bring us out of our ego-centered universe wherein our ego is god.

The theatre of life is God’s Universe.  History is God’s story.  Global and national events are part of GodScript.  People are artist-participants who are both given a script and their own personal creativity to express their role in God’s drama.  God directs the drama.  In this drama, in this Universe, my role might end in a horrible death after a series of painful experiences of suffering.  In this drama, I have to interact with other artist-participants.  In this drama, I am not the center.  From the perspective of modern individualism, this is not the way to live.  But the theatre of life is God’s Universe, not mine.  History is God’s story, not mine.  My role is both God’s and mine, but I have to make the decision how I would act, when the Director queues me in.

The Story of God ends in Hope, Justice and Righteousness.  That’s what the Great Script says.  I may be in the middle of a crisis.  I may be experiencing pain right now, which is just a series of painful experiences in my horizon.  I might die a horrible death.  But I know how the Great Story ends.  In that Story, I am an artist-participant.  And I’ll do my part well!

GodSignature. The laws of nature–from the most basic micro-particle to the ultimate macro-reality of the universe–is God’s signature of faithfulness and sovereignty.  This signature is my security why I hope in God (vv. 19-26).  While reading these verses, I can’t help but imagine the talks between God and Jeremiah.

“Yes, God.  Here am I,” Jeremiah replies.  Responding with Here am I is like saying “Present!” or “Here!” when the classroom teacher calls your name.

“You don’t seem to buy the idea of Hope in the midst of crisis, huh?” asks God.

Jeremiah complains:  “How can we, as a people, hang on to Hope?  You promised King David that his royal dynasty would rule over Israel forever.  You promised the Levites that they would continue to be priests in your temple forever.  Now, the lame duck royal family is about to be dethroned.  The temple is about to be ruined.  There’s no stability!  No permanence!  No Hope!”

“Ah, ah, ah!  Your perspective is too limited,” answers God.  “I don’t blame you.  You’re a limited, finite, near-sighted mortal.  But I love you.”

“And also…” Jeremiah is about to make Complaint No. 2.

But God interrupts: “Wait, I’m not finished talking yet.  Well, well.  My prophet doubts my promises, huh?  Have I broken my promise about the cycle of night and day?  No.  Likewise, I’ll fulfill my promises to the descendants of David and Levi.”

What if the setting of Jeremiah was our 21st century Quantum Age?  I think God would have said something like this: “Jeremiah, chill!  My promise is like an on-going symphony.  Look at the world.  It’s a world of music.  Everything that exists is part of my unfinished symphony.”

“Well, you better start understanding how I run my Universe,” explains God.  “You see that LCD screen?  It’s a matter composed of atoms, right?  Atoms are made of protons, neutrons and electrons.  Mortals like you can’t divide electrons further.  But protons and neutrons are each made of three even tinier particles called quarks.  Now, from the current knowledge of mortals like you, quarks and electrons may not be particles at all but multi-dimensional entities called ‘branes,’ some of which manifest themselves as tiny loops of ‘string.’  While the strings are identical, the way they vibrate determines whether they act as electrons or quarks, somewhat as a violin string sound A or B, depending on how it’s tuned.  My Universe, Jeremiah, is an on-going symphony.”

“The point is,” God continues, “that in my Theatre, I direct the Drama with the music accompaniment.  As long as I’m directing the music, the drama continues and the Story will still end in Hope, Justice, and Righteousness.  That’s my Signature Design!  Got it?”

No conclusion.  The drama goes on.  The symphony is still being played.