WHY WE STILL HAVE TO EARN OUR PHILIPPINE INDEPENDENCE: MY JUNE 12 REFLECTIONS 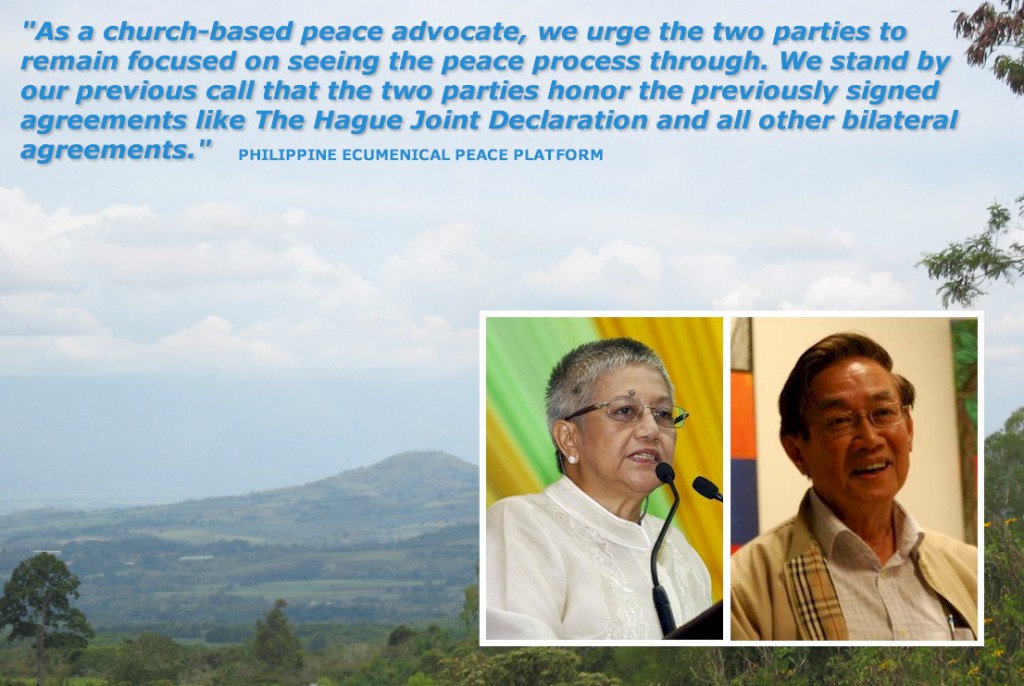 Jalandoni wants Padilla to free two political prisoners who are also consultants of the NDFP — Allan Jazmines and Tirso Alcantara.  The NDFP claims these two persons to be covered by the Joint Agreement on Safety and Immunity Guarantees (JASIG).

GPH said that the NDFP should not use the formal talks to secure the release of Jazmines and Alcantara. This GPH position was communicated through the Department of National Defense.

I would like to refer to the statements made in January of this year, of government chief negotiator Alexander Padilla, after the preliminary negotiations between the government and the NDFP. I quote negotiator Padilla, who said in his statement that “the government agreed to work, on best effort basis, for the release of NDFP consultants and personalities who are qualified under the JASIG so they may meaningfully participate in the negotiations.”

“The resumption of the formal negotiations with the NDFP will focus on the remaining substantive agenda on: socio-economic reforms, political and constitutional reforms and end of hostilities and disposition of forces. To avoid unwarranted disruptions of the negotiations, the Parties also established sidetable mechanisms to review and address procedural and non-substantive issues such as JASIG implementation, the release of alleged political prisoners (APOs), and confidence-building and goodwill measures.”

In line with this, the Government reiterates its sincerity and commitment to this process. In fact, in February of this year, before the start of the formal talks in Oslo, Norway, we facilitated provision of travel documents for NDFP Reciprocal Working Committee on Socio Economic Reform (RWC-SER) members Rafael Baylosis and Randall Echanis.

Ms. Teresita (Ging) Quinto-Deles, the Presidential Adviser on the Peace Process of the Government of the Philippines (GPH, formerly designated as the GRP), is mistaken in claiming that the Joint Agreement on Safety and Immunity Guarantees (JASIG) is a mere side-table issue in the GPH-NDFP peace negotiations.

As stipulated in the Joint Communique signed by the Parties and witnessed by Ambassador Ture Lundh of the Royal Norwegian Government on 18 January 2011 in Oslo: “The GPH Panel agreed to work for the expeditious release of detained NDFP consultants and other JASIG protected persons in compliance with the Joint Agreement on Safety and Immunity Guarantees (JASIG) and in the spirit of goodwill.”

The NDFP proposal to defer the talks of the Reciprocal Working Committees on Social and Economic Reforms (RWCs SER) and the Working Groups on Political and Constitutional Reforms (WGs PCR) scheduled in Oslo this month is meant to allow the GPH to comply with the JASIG.

From the WebSite of the National Democratic Front of the Philippines

As a concerned peace-building fieldworker, our hearts resonate with the statement of the Philippine Ecumenical Peace Platform:

As a church-based peace advocate, we urge the two parties to remain focused on seeing the peace process through. We stand by our previous call that the two parties honor the previously signed agreements like The Hague Joint Declaration and all other bilateral agreements.

Specifically, we urge both parties to honor the terms of the Joint Agreement on Safety and Immunity Guarantees (JASIG) agreed upon in March 16, 1998 and in so far as practical measures in pursuit of this concern have been reiterated in the Oslo Joint Statement dated 21 February 2011.

We call on the two parties to follow the spirit of the JASIG as it is a crucial issue around the formal peace talks. Its faithful implementation enables the two parties to resume the negotiations in earnest. On the agenda of the formal peace talks are the social and economic reforms. This second substantive agenda is very central to the negotiations as it seeks solutions to address the roots of armed conflict that has afflicted our land for decades.

Finally, we reiterate our unceasing call for the people to support the peace negotiations. Primarily, our task is to be vigilant lest groups or acts that undermine our aspiration for a just and lasting peace take the upper hand. A just and peaceful country is possible if we remain focused on the road to peace. We owe it to ourselves and the future generations.

From the WebSite of the Philippine Ecumenical Peace Platform

Thank you for continually praying for the peace in the Philippines.

May the Peace of God embrace our hearts, our minds, our communities, our people, our land, and our world!

Permanent link to this article: https://waves.ca/2011/06/10/gph-and-ndfp-please-return-to-the-negotiating-table/