CBAP AND CJOL EMBRACE EACH OTHER AS ONE BODY OF CHRIST 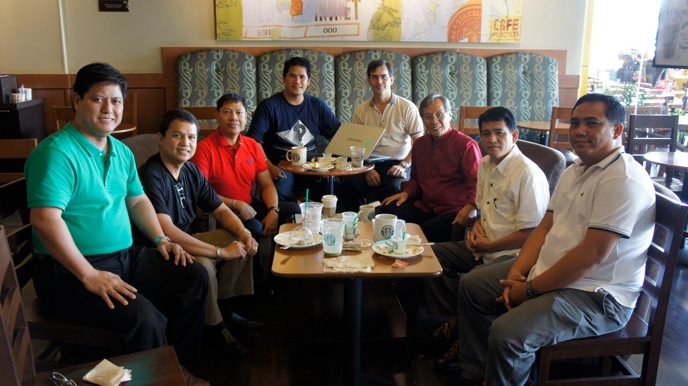 PAR is Peace and Reconciliation.

A very significant PAR meeting happened before my eyes yesterday afternoon. But it was not planned by human beings. I believe it was a Divine Appointment.

We were driving from Clark, Pampanga to Manila at around 2:00 PM, informally reflecting on our individual experiences at the recently-concluded 29th National Assembly of the Philippine Council of Evangelical Churches (PCEC). I was travelling with the management team of the Conservative Baptist Association of the Philippines (CBAP). Bishop Noel Pantoja, CBAP General Director, was driving. (Yes, we’re related. He’s my younger brother.) With us were Pastor Joel Macatangay, CBAP Director of Church Planting; Rev. Arnel Bernas, CBAP Director of Church Development; and, Rev. Joel Eyestone, CBAP Director of Theological Education by Extension.

I was curious how these executives of a major evangelical group in the country would translate the new PCEC thrust of community and national transformation into their own areas of responsibilities. So, I challenged them: “Guys, I’d buy you coffee if you would answer my questions on bridging the vision of transformation into actual church policies and programs.”

We started our discussion.

When Noel saw a Starbucks coffee shop at the Shell of Asia along North Luzon Expressway, we stopped for coffee. All of us ordered our choice of coffee.

I was about to pay the cashier when Mark Sosmena, who was travelling alone, entered the coffee shop. Mark is the President of the Board of CBAP. He offered to pay for all the coffee drinks we ordered.

We had coffee together. The first few minutes were full of jokes and laughter.

We were all silent for a while. I felt he Spirit of God searching our hearts.

“Let me share what’s in my heart,” Bishop Magbanua continued. “I noticed that you neglected some important segments of our journey together. If you’ll remember, CJOL started as a holistic church-planting movement within the umbrella of CBAP. We envisioned to plant churches that plant churches who, in turn, would respond to the needs of people in all aspects of life—spiritual, social, and economic. But the CBAP leadership, during that time, chose to focus on growing big-sized churches. I felt CBAP neglected CJOL.”

Bishop Magbanua spoke the truth in love. I did not perceive any negative spirit or resentment. He shared his heart and mind as a wise older brother talking to responsible younger brothers. There was so much respect and transparency in that impromptu meeting.

Mark Sosmena was the first one to respond. He said, “Manong (Elder Brother) Fred, I speak as President of CBAP. Please forgive us for our neglect of you and CJOL in the past.” As his hand pointed to the church executives around him, he continued: “We’ll make sure that the relationship between CBAP and CJOL will be reviewed. We’ll also make sure that as we write CBAP history, we will be truthful and just in giving credit to whom credit is due.”

Bishop Noel Pantoja also shared his thoughts: “We are forming a CBAP historical committee who would write a more inclusive and transparent narrative of our journey as a Body of Christ. We will emphasize the contribution of the Filipino church-planters, including 50-lessons we have learned, in the last 50 years. We will also draft, in consultation with you and your leadership team at CJOL, a Memorandum of Agreement (MOA) between CBAP and CJOL. We have to clarify our working relationship. By God’s grace, we will reflect and demonstrate the statement we just signed a few hours ago at the PCEC National Assembly.”

As a witness and a blogger of this amazing story of peace and reconciliation, my spirit worshipped the God of peace and of justice for allowing us to experience genuine shalom among some of the key leaders of Evangelical Christians in my beloved land!

Permanent link to this article: https://waves.ca/2011/07/16/cbap-and-cjol-embrace-each-other-as-one-body-of-christ/