DANN PRESENTED MINDANAO PERSPECTIVES AT A FORUM ON HUMAN TRAFFICKING 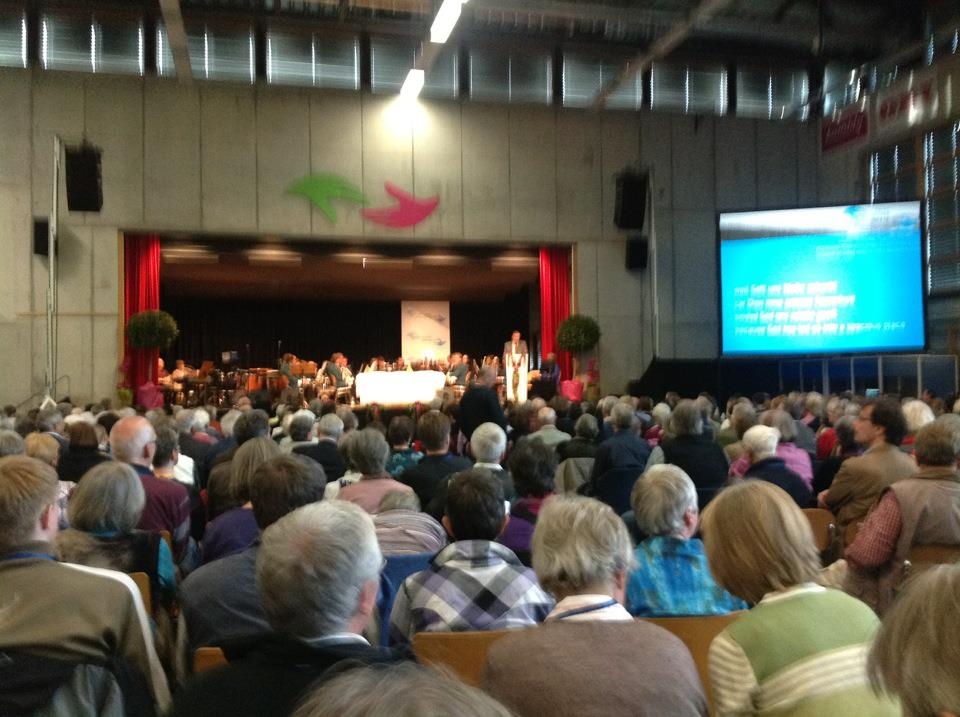 The Mennonite European Regional Conference (MERC) invited us to share the story of PeaceBuilders Community, Inc. (PBCI) during the evening plenary session of their 2012 General Assembly in Sumiswald, Switzerland last May 18, 2012. Around 800 people gathered together representing the various Anabaptist churches and agencies throughout Europe.

A few days earlier, we attended the Peace Commission of the Mennonite World Conference (MWC) and participated in the discussions during their meetings between May 14 and 17, 2012 in St. Chrischona Retreat Centre in Basel, Switzerland. We were asked to share our Mindanao peacebuilding ministry as the Commission talked about various cases of conflict transformation processes among some MWC constituencies.

We initiated the gathering of key Mennonite mission agency leaders for a short after-dinner meeting while in Basel. The two main objectives of the meeting were: (a) to get to know each other better as fellow mission leaders; and, (b) to initiate a working relationship among various mission agency leaders vis-à-vis the planting of PeaceChurch Philippines in Global City, Metro Manila, Philippines, within the structure of the Integrated Mennonite Churches in the Philippines. The leaders who were present with us were:

All of us agreed –

After the meetings in Switzerland, we travelled to Leeuwarden, Friesland, in the northern parts of The Netherlands  to meet with the Mennonite leaders there. They also gave us a historical orientation and tour of the birthplace and points of interest regarding the life and ministry of Menno Simons.

On our way back from The Netherlands to Switzerland, we shared the Peace and Reconciliation ministries we’re doing in the Philippines to the Mennonite congregations in the cities of Strasbourg and Altkirch in France.

Finally, we were invited for a lunch fellowship among the Mennonite leaders in Bern, Switzerland.

We’re happy for the spiritual connections and possible networking relationships that resulted in this European visit:

2. Roelof Akse, the Lead Pastor of Leeuwarden Anabaptist Community, expressed his desire to have a working relationship with PeaceBuilders Community and the Integrated Mennonite Churches in the Philippines. We are currently exploring the idea of transferring some of the basic dairy farming principles and technologies from Friesland and how they can be applied to the geographical and demographic contexts of the Philippines.

3. Max Wiedmer, Director of Swiss Mennonite Mission (SMM), expressed his desire to explore working with PBCI.  He requested a copy of our Peace and Reconciliation Resource Manual for a possible internship program between IMC-PBCI and SMM. He was also the one who coordinated our speaking engagements in France.  Max’s vision to connect with the Mennonites in the Philippines is consistent with what we’ve heard from some European Mennonite leaders to whom we have listened:

4. Donald Peters, Executive Director of Mennonite Central Committee Canada, interviewed us about our Peace and Reconciliation (PAR) work among the evangelicals in the Philippines. He expressed interest in the vision of establishing a PAR Commission in each of the 80 provinces in the Philippines by 2015 (PAR 80 by 2015).

5. Nelson Kraybill, President-elect of the Mennonite World Conference expressed interest in the story of the evangelicals in the Philippines getting involved in the national peacebuilding between the government and the various non-state armed groups. He chose to sit with us during a lunch break to compare notes on national peace and reconciliation issues.

6. Wilhelm and Liesa Unger, CoPastors at Regensburg Mennonite Church, Germany, interviewed us so they can share our story to their congregation during the Pentecost holiday. Liesa is also the event coordinator for the Mennonite World Conference 2012 in Basel, Switzerland and for the MWC 2015 in Pennsylvania, USA. Wilhelm promised to keep in-touched with us.

7. Dr. David Shenk, Global Consultant, Eastern Mennonite Missions, renewed his mentorship with us through email. He has been a great theological-missiological guide to us.

Permanent link to this article: https://waves.ca/2012/05/28/we-were-invited-by-the-european-mennonites-to-share-the-pbci-story/