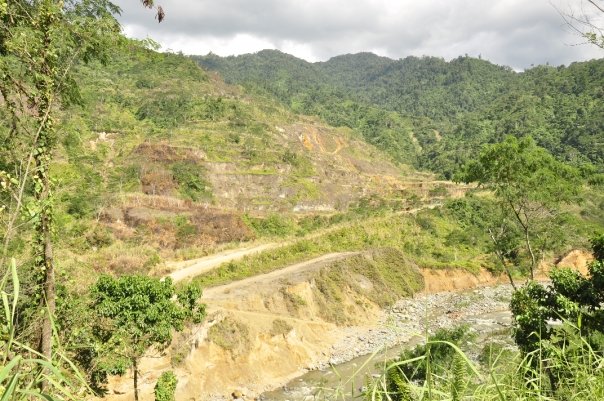 Part of my job here at PeaceBuilders Community is to deal with the economic and ecological issues we’re facing as a Mennonite peace and reconciliation consulting group. A big issue happening right now in Mindanao is that of mining our land’s precious minerals.

The under-developed Philippine economy needs the revenues that can potentially be generated through the mining industry. Every year, our country produces about a million individuals looking for a job but our economy can only produce about two hundred thousand jobs. The rest would be jobless, easy recruits by human traffickers, by criminal organizations, or by various non-state armed groups. Most government agencies and business corporations advocate for the accelerated development of the mining industry to help curve unemployment, poverty, and social injustices in the Philippines.

However, the Philippine political system is not yet mature to handle huge multi-national mining corporations who have more economic power than the government of the Philippines. Our system of governance is not yet capable to implement and enforce the existing laws that would guide the mining industry to be inclusive in terms of its financial benefits. In most mining operations in the Philippines, the financial investments, the tax revenues, and the financial income related with mining tend to corrupt the government, the family, and the society as a whole. A Jesuit scholar, Fr. Joel Taboras, describes this phenomenon well in his article, The Dancing Elephant in the Crystal Shop: SMI. In his critic of the government’s granting of “conditional Environmental Clearance Certificate” (ECC) to Sagittarius Mines, Inc. (SMI), he avers:

SMI will clear 3,935 hectares of forest – including 1,350 hectares of protected rainforest. It threatens 812 flora species, 247 of which are Philippine endemics and 52 of which are mainland Mindanao endemics. 55 species are under the Threatened Species list of the International Union for the Conservation of Nature. For amphibians and reptiles alone, 28% are Philippine endemics and 20% are Greater Mindanao endemics.

With its 500-hectare large pit with the depth of two stacked Empire State Buildings and its similarly large fresh-water catchment, it will adversely affect the fresh water supply of the Koronadal Valley, including its irrigation system, and threaten its shallow aquafers with toxicity. The Mal River will be worst affected through the SMI construction of a fresh water dam just above the NIA’s irrigation dam.

Finally, the mine is in a highly unstable social area where not only old forests but the indigenous B’laans are to be displaced to make way for SMI’s open pit and fresh water catchment and toxic-waste mountain, and where the Free and Informed Prior Consent (FIPC) of most of the B’laans has not been secured. In fact, instead of the FIPC, there have been ugly killings of B’laans who have stood up to fight the mines, including Atari and Daguil Capion. Just yesterday, the Capions testified before a congressional committee in Koronadal how their relatives had been massacred. Here, unfortunately, the military and the police are implicated.

Meanwhile, 40,000 Muslims depend on fishing in Lake Buluan, almost certainly to be adversely affected by the SMI project.

In connection with this issue, we have been bombarded with questions by our partners, colleagues, and critics while in the field. Here’s the most frequent one: “Is the PeaceBuilders Community, Inc. (PBCI) pro-mining or anti-mining?”

There is no simple answer to this.  We decided to educate our position.  So, we started by consulting with Rosabel Naromal.  She graduated with a Bachelor of Science in Geology from the University of the Philippines in Diliman, Quezon City.  Her passion is to use her expertise to serve God, to serve the Filipino people, and to help develop a proposal regarding mining issues from the perspective of advancing justice-based peace and development.

For the past six months, Rosabel has been doing research on mining from ecological, economic, social, and political perspectives.  She reviewed the history of mining laws in the Philippines. She also reviewed the arguments in the on-going debate between those who advocate to accelerate the mining industry, and those who advocate to stop mining operations in our country.

Our staff also identified and discussed the various views and positions who make up the spectrum between pro-mining and anti-mining advocacies.

We also sent our field workers on a fact-finding mission to some mining operations in Surigao del Norte, Compostela Valley, and Kalinga.

Next week, the reports of our field workers will be integrated into the paper that we are developing as a team.

Meanwhile, Dann is also working on a theological reflection paper on mining.

Soon, we will publish our position paper. But before that, we’d like to listen to you. Would you kindly share your perspectives on this issue of mining? Please share your view on the comment box below.

Permanent link to this article: https://waves.ca/2013/02/07/an-economic-ecological-concern-should-pbci-be-anti-mining-or-pro-mining/