WITH MUCH ENTHUSIASM, WE CELEBRATE CHRISTMAS WITH YOU

OUR FAMILY’S JOURNEY THROUGH DISASTERS 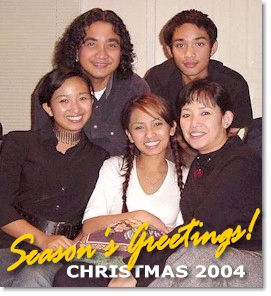 A Tsunami was about to kill thousands of people when this family Christmas photo was taken.

It was the 2004 Sumatra-Andaman Earthquake that caused tsunamis in the coastal areas of Southeast Asia. A few hours later after this shot, I flew out of Vancouver, Canada to live in Sultan Kudarat town in Maguindanao. While flying over the Pacific Ocean, the shores of Southeast Asia was hit by the above-mentioned tsunamis. The Bangsamoro in Mindanao, while helping their sisters and brothers devastated by the tsunami, embraced me and took care of me for 6 months. A Maguindanao family has become my beloved family.

Our peacebuilding ministry in Mindanao was taking-off. Joji and I psycho-spiritually suffered as the survivors of the 2008 Sichuan Earthquake in China struggled to rebuild their lives and communities.

We also cried with the 2011 Nuclear Disaster in Fukushima, Japan. Then disaster came close to home. We ended up forgetting our planned Christmas parties. We shared our lives with the survivors of the 2011 flash floods in Northern Mindanao caused by Sendong.

The 2012 Super Typhoon Pablo in Southeastern Mindanao brought us to our knees; since then, Christmas will never be the same.

Now, we’re still struggling with the devastation caused by the 2013 Super Typhoon Yolanda in our lives. This kind of disaster, the strongest in the known history of mankind, with such apocalyptic magnitude, shook the very foundation of our life as a family.

Along with our people, along with the rest of suffering humanity, we struggle with various disasters in life — caused by nature and caused by humans. Rebuilding of lives, homes, trust and trustworthiness is a significant challenge.

But we follow the One who rose from the dead. And so, we will, for sure, rise up!

Merry Christmas? I’m not sure.

Blessed Season of the Celebration of the Birth of Jesus? For Sure!

Permanent link to this article: https://waves.ca/2013/12/18/our-familys-journey-through-disasters/