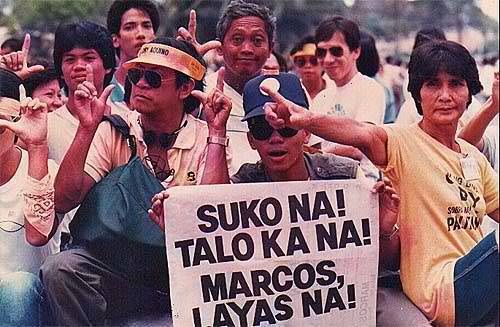 I was with millions of Filipinos who participated in the people’s movement in 22-25 February 1986 along the Epifanio delos Santos Avenue (EDSA) to bring down the brutal dictatorship of Ferdinand Edralin Marcos, Sr., (who is the father of Ferdinand “Bongbong” Marcos, Jr.). Since then, the event was referred to as the EDSA People Power.

The Filipino may have gotten rid of the Marcos dictatorship. But, as one retired bishop observed, we’re still under a virtual dictatorship through the abuse of public funds–the pork barrel system that sustains patronage politics.

The EDSA People Power was an unfinished active non-violent revolution. We need to finish the people power movement. It seemed we were good at starting well but we still have to improve on finishing well.

Perhaps this time, we may be ready as a people to continue the people’s power movement. This time, let’s finish well by dismantling the roots of corruption—the patronage political system as perpetuated by the oligarchs.

We can all work together to advocate for the following:
1. Abolish the pork barrel system.
2. Reveal, investigate, and prosecute pork barrel scammers — past and present.
3. Pass the Freedom of Information Act.
4. Dismantle the patronage political system of the oligarchs.

What we tried to contribute to the world–active non-violent revolution–needs to be continued until we see genuine just-peace transformation in our beloved land.

Permanent link to this article: https://waves.ca/2014/02/27/a-personal-reflection-on-edsa-peoples-power/