CHILDHOOD MEMORIES IN THE RICE FIELDS OF SANTA MARIA

WE INVITE OUR CANADIAN PARTNERS TO INVEST IN MINDANAO

We are calling investors from among the Mennonite Church Canada to come and see for themselves what is happening in the economy of the Philippines, especially in Mindanao.

Our country’s economy remained to be on an upward trend even after the major floods, armed-skirmishes, super-typhoons, storm surge, and earthquake we have experienced in the past three years. According to the Asian Development Bank: “Despite natural disasters that devastated parts of the country in the fourth quarter of 2013, gross domestic product (GDP) grew by a solid 6.5% in that period, bringing full-year growth to 7.2%, well above the 4.7% average recorded from 2008 to 2012.”

The Philippines, according to Moody’s Analytics, may even lead Asian economic growth in 2014. Our gross domestic product (GDP) has the potential to grow between 5.3 to 6.5 percent this year, lower than last year’s 7.2 percent and the government’s target of 6.5 to 7.5 percent for 2014. This is a little bit higher than that of Asian region’s projected growth, which is near 5 percent in the second half of 2014.

Addressing about 200 of Malaysia’s top businessmen, Mr. Aquino said the Philippines was past its days as a “laggard” and “the sick man of Asia,” with its economic rise recognized internationally through credit ratings upgrades and renewed global interest.

“Mindanao … has land so fertile that a patch of it left unattended for a short while becomes quickly overgrown. Now that lasting peace in that particular region has come within reach, perhaps investing this early in Mindanao is an opportunity that is presenting itself to all of us,” Mr. Aquino said.

“Now, you are presented with another opportunity to reap the maximum gains from a country that is experiencing rapid growth, and is set to sustain [that] growth over many years. May I pose this question: Is anyone here really willing to pass up this opportunity and set [themselves] up for regret somewhere down the line?” he said.

Yes. As the Comprehensive Agreement on the Bangsamoro will be signed this month, let’s enhance the actual peacebuilding, reconciliation, and sustainable livelihood work on the ground.

The Philippine government invites the Malaysians to invest in Mindanao.

We now invite the Canadian business community to invest specifically with us as we expand Coffee For Peace! 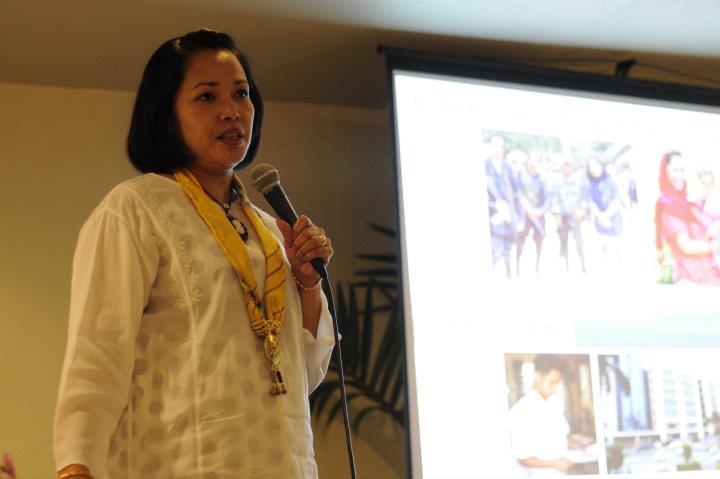 Joji Felicitas B. Pantoja is co-founder and chief operating officer of both Coffee for Peace and PeaceBuilders Community. She graduated from the University of Santo Tomas (B.Sc., 1979). She also studied International Relations at the University of the Philippines, Diliman, Quezon City. She moved to Canada in 1986 and since then developed a successful career in the investment and financial industry with Investor Group Canada and then with Investia Financial Services.

She returned to the Philippines in 2006. In 2010 she became the Women Entrepreneur Winner of CitiBank-Business in Development Network, Philippines–defining her bottom lines as profit, people, and planet. She also received an award from the Foundation for Sustainable Society, Inc. (FSSI) in 2010 for “Business with an Impact on the Bottom of the Pyramid.”

Asked why she left her career in Vancouver for Mindanao, she said: “I can’t imagine having a summary of my life printed on my tombstone as, ‘Spent her life managing rich people’s money.’ I want to be remembered as: ‘A person who walked with the people as they find dignity through holistic and sustainable economic development.’”

Permanent link to this article: https://waves.ca/2014/03/20/we-invite-our-canadian-partners-to-invest-in-mindanao/