TALA IS OUR NEW MISSIONARY TO KALINGA

TRUST AND TRUSTWORTHINESS IN BUILDING PEACE 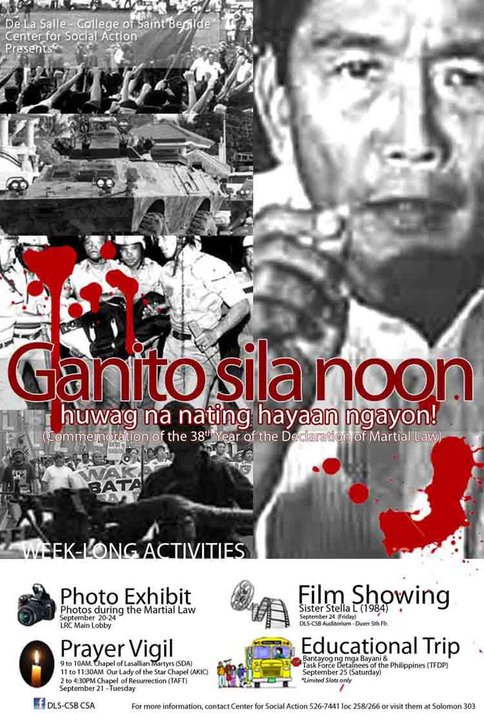 I was in high school when Martial Law was declared. During that evening, I was watching TV in the home of a family friend — an American who was managing Ford Military Sales in Subic Naval Base, the largest American military base in the Pacific. We were having dessert after a delicious dinner when the program we were watching was interrupted by the declaration of Martial Law.

That was the beginning of the Filipino people’s long nightmare:

:: More than 50,000 people, including those critical of his governance, were arrested during the first three years of his martial rule, according to Amnesty International. The number does not include the “desaparecidos” or victims of enforced disappearances under Marcos.
:: The Marcos regime was also responsible for 3,257 murders, 35,000 torture cases, and 70,000 incarcerations, according to members of Akbayan party-list group, of whom many suffered under the dictatorship.
:: The repression forced thousands to go underground, with the book “Dictatorship and Revolution: Roots of People’s Power” estimating that number of communist rebels growing from 1,250 in 1972 to an estimated 40,000 in 1983 because of Marcos.
:: The value of the peso also dropped from P1 to US$ 1, to P25 pesos US$ 1, during Marcos’ time in office.
:: From just US$ 360 million in 1962, the Philippines’ debt reached P28.3 billion at the end of Marcos’ rule in 1986, according to James K. Boyce’s “The Political Economy of Growth and Impoverishment in the Marcos Era.”
:: Meanwhile, the Presidential Commission on Good Government said the Marcoses stole at least $10 billion from the nation’s coffers.

Despite Marcos’ systematic militarization of young people, many of us became aware of the injustices under the US-backed dictatorship. Soon, I understood why there was US Naval Base in Subic. My social consciousness was awakened.

Our present socio-political institutions are so fragile, the same family and the same oligarch class, manipulated by the same superpowers, are just waiting for the right moment to impose a dictatorial power once again.

There are voices of seemingly pious statements in reaction to our commemoration of the injustices of Martial Law. “Forgive and forget,” they say. I do not believe this cliché. Genuine forgiveness is based on truth and justice, not a denial of truth and justice. Social evils get perpetuated because of similar self-righteous silence regarding lies and injustices.

Truth. Mercy. Justice. Peace. These are the four virtues I must uphold-in-balance if I claim to be practicing biblical peacemaking.

Institutional Lies. Legitimized Police/Military Brutality. Legalized Injustice. Systematized Violence. These four spawns of Marcos’ dictatorial regime are critical factors why we’re experiencing the current social cancer we’re facing today. To forget the facts of untruth and injustice under the Martial Law is to deviate from the path of genuine mercy and peace.

Permanent link to this article: https://waves.ca/2014/09/23/marcos-martial-law-years-my-longest-nighmare/