MY FRIEND, MAIMAI, AND I ATTENDED THE PEACE TALKS BETWEEN THE GOVERNMENT AND THE CORDILLERA PEOPLE

LESSONS I LEARNED FROM AN INTERNATIONAL PEACE CONFERENCE IN EGYPT 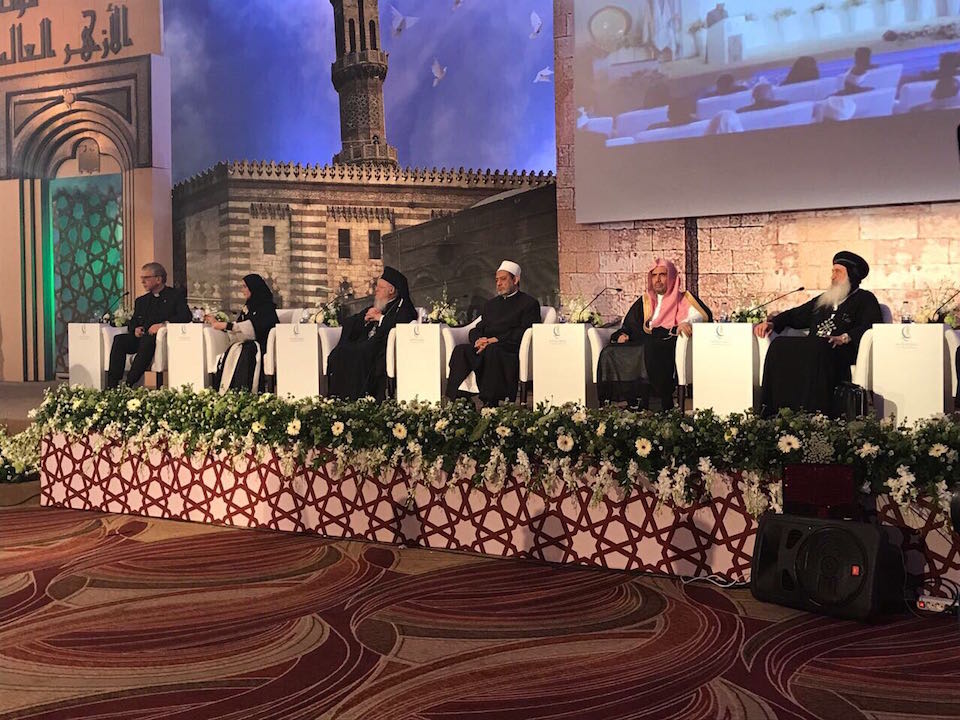 The impact of the Al-Azhar International Peace Conference in Cairo, Egypt last 27-28 April 2017, on me, was life-changing. It was an opportunity to practice the Great Commandment moment-by-moment and with a deeper understanding. I was given a global context to love Jesus more and to be more faithful to Jesus by embracing and affirming the Other. It was a series of events when I enjoyed the absolute now — a glimpse and a taste of being intimate with the One whose self-reference is The Great I Am.

The conference was used by God to open my heart to love and embrace all parts of the Body of Christ, all segments of the People of God, and all the respectable representatives of God’s humanity. As one coming from an evangelical anabaptist background, my sense of connection with all human beings from all faiths and worldviews became wider and deeper. Love, Joy, and Peace were incarnated in this two-day event.

Speakers on the first day called on followers of different faiths and worldviews to work together to denounce extremism, terrorism, and promote peace and co-existence framed in God’s love, justice, and peace.

Please allow me to share some of my personal reflections and learnings, almost a week after this event:

:: It was an opportunity to practice the Great Commandment moment-by-moment and with a deeper understanding. There were around 400 of us — religious leaders, scholars, political figures, and ground workers from around the world. I was one of the ground-workers who was given the chance to experience this historic event. Throughout the conference, the Spirit of God made me so aware of my neighbors in this globalized city or village. I sat with them. I ate with them. I listened with, and to, them. They listened to me. I was with my neighbors from all over the world.

The voice of the Spirit was clear. Love God. Love your neighbor as yourself. I had to read and reflect on Matthew 22:36-40 again. Jesus was asked about his view of a God-worshiper’s highest priority: “Teacher, which is the greatest commandment in the Law?” His reply was straightforward: “Love the Lord your God with all your heart and with all your soul and with all your mind. This is the first and greatest commandment. And the second is like it: Love your neighbor as yourself. All the Law and the Prophets hang on these two commandments.”

The Great Commandment is the very foundation of the justice and peace that humanity has been seeking.

The work of peace is possible because of love. Pope Francis alluded to this in his speech during the closing session of the conference. He said, “God, the lover of life, never ceases to love people, and so he exhorts us to reject the way of violence as the necessary condition for every earthly covenant…” He also emphasized that, “it is essential that we reject any absolutizing that would justify violence. For violence,” he continues, “is the negation of every authentic religious expression.”

Pope Francis also shared his basis of confidence in Christian peacemaking. “God,” according to him, “assures all those who trust in his love.” Global understanding between differing religions and cultures is possible because “the way of love lies open to human beings and that the effort to establish universal brotherhood is not vain.”

The more we love God, the more we can love the other. Loving the other implies a radical call of action. Pope Francis called for “an end to the proliferation of arms.” He warned that “if they are produced and sold, sooner or later they will be used.” He further said: “Only by bringing into the light of day the murky maneuverings that feed the cancer of war can its real causes be prevented.” He obliged the national leaders, institutions and the media “to undertake this urgent and grave task… to initiate processes of peace, seeking to lay a solid basis for agreements between peoples and states.”

Through this fresh reflection on the meaning of the Great Commandment and its implications to local, national, and international peacemaking, I began to quietly pray: “By your grace and mercy, please make me a funnel of your love, moment-by-moment.” 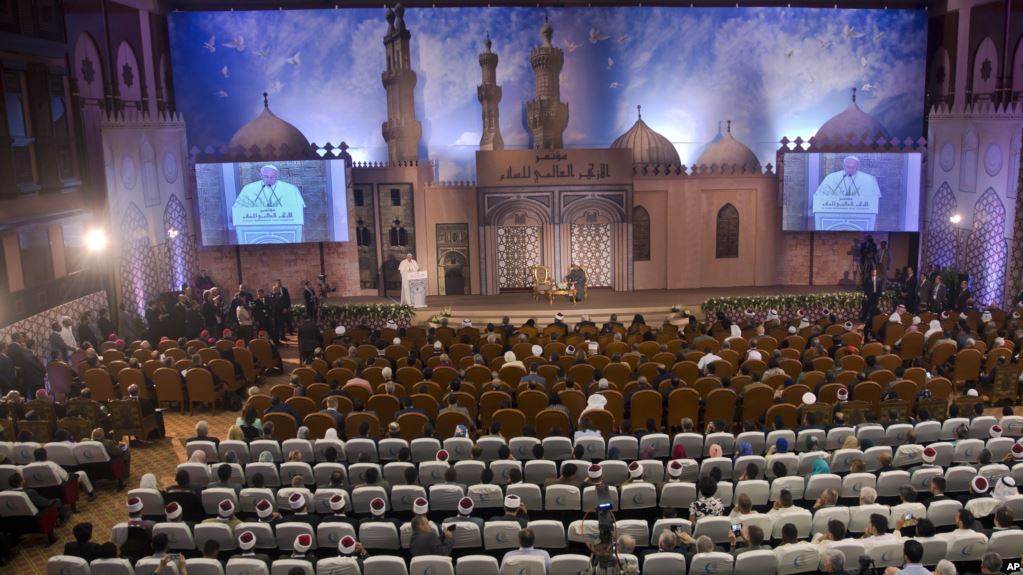 It was an existential moment listening to Pope Francis while sitting on my assigned seat at the fourth row in front of his podium at the Al-Azhar Conference Center. He emphasized that, because of God’s love, “we must categorically reject all forms of hatred and violence in the name of God.” Al-Azhar International Peace Conference, Cairo, Egypt. 28 April 2017.

:: I was given a global context to love Jesus more and to be more faithful to Jesus by embracing and affirming the Other. Christian faith, by definition, centers on the person of Jesus Christ.  Emil Brunner once said that, “the center and foundation of the whole Christian faith is Christology, that is faith in Jesus Christ” (The Mediator, p. 232).  For most Christians like me, christology is the central doctrine.

A Christian’s christological view necessarily affects her or his relationship with the religious Other.  In an exclusivistic christology, the Other is treated as one who is to be converted, or as an enemy.  In an inclusivistic christology, the Other is treated as an anonymous Christian, or as one who may have wisdom but still incomplete without the full knowledge of Christ.

Can I continue to love and claim Jesus Christ as the Incarnate and Risen One without “exclusively” or “inclusively” alienating the religious Other?

Based on David Jensen’s Dialogical Christology (In the Company of Others: A Dialogical Christianity), it is possible to both affirm the Christian claim that Jesus Christ is the Incarnate and the Risen One, and at the same time, be dialogically open to, and genuinely embracing of, the Other in the context of religious pluralism in a global era.  The Kenotic Christ — that means, Self-Emptying Christ — is the Incarnate and Risen One who relinquished his own self-privileges to identify, as closely as possible, with the radically different, or rejected, or oppressed Other.  But the relinquishment of his self-privileges does not necessarily mean self-abnegation.  The Incarnate One and Risen One is present in his absence.  The challenge of Jensen’s dialogical christology is that, the Kenotic Christ calls us to an active experience of self-emptying discipleship in a face-to-face encounter with the Other.

In this inter-faith peace conference, I was brought into an existential opportunity to demonstrate that a kenotic or self-emptying christology can be applied in an experiential dialogue with a specific religious Other—Muslims, Buddhists, Zoroastrians, Taoists, Hindus, Jews, and various Indigenous Spiritualities.  There are doctrines that cannot be resolved between us as propositional statements of particular truth-claims. But a kenotic view of truth can open doors for a more embracing relationship with the religious Other while affirming valued Christian claims such as Christ as the Incarnate and Risen One on my side, and various worldviews, faith statements, and belief systems on the side — that of my new friends and colleagues in peacebuilding

This kenotic christology also has significant implications toward my understanding of ethics and ministry in a pluralistic world; it demands a careful, self-emptying, self-examination of one’s ethical motive for mission and global ministry in the context of a face-to-face encounter with the religious Other.

:: It was a series of events when I enjoyed the absolute now — a glimpse and a taste of being intimate with the One whose self-reference is The Great I Am. I came to this conference unprepared. The Rev. Dr. Efraim Tendero, general secretary of the World Evangelical Alliance, sent me to this event on his behalf due to another commitment. I had no money for this. I had a very important commitment to be with a political front as they negotiate with the government and I had to ask their permission and blessing to exonerate me from our scheduled peace talks. The organizers of the Al-Azhar International Peace Conference paid for my air travel and hotel accommodation to be in this conference. The visa arrangement took a day to be released.

In each step of the way, I had to submit to the Spirit’s leading while doing my best and had to tell myself, “Believe! At this very moment, the Spirit is working beyond your capacity.” That moment-by-moment submission liberated me from stress. I just enjoyed the The Power of the Now.

After the conference, I decided to stay in my hotel room and just planned to wait for my Cairo-Doha-Manila flight the next day. I had no extra money for any tourist activity. One of my new friends called me and invited me to join him to see the Great Pyramid of Giza. He already rented a van and all I had to do was to voluntarily contribute with what I can, pay for my own entrance fee, and enjoy the tour. While preparing for the Giza trip, a friend of my children from Canada, who is now living in Cairo, invited me to see the Old City and to have a dinner with her family. After our trip to the pyramids, Shannon Aziz and her family picked me up from where I was and gave me a treat to experience their everyday Cairo life as a family.

Trusting the Spirit of God moment-by-moment is a spiritual discipline that I’m beginning to enjoy now that I’m 60 years old. It’s actually a glimpse and a taste of being intimate with the One whose self-reference is The Great I Am — The Eternal Now.

Permanent link to this article: https://waves.ca/2017/05/03/lessons-i-learned-from-an-international-peace-conference-in-egypt/