LIVING THE ‘KINGDOM ETHICS’ AND BEING LIBERATED FROM FEAR-ORIENTED OUTLOOK

FIELD NOTES AND REFLECTION ON THE MEANING OF ‘VIOLENT EXTREMISM’

I STAND IN SOLIDARITY WITH THE PALESTINIANS; I PRAY FOR THE PEACE OF BOTH JEWS AND PALESTINIANS 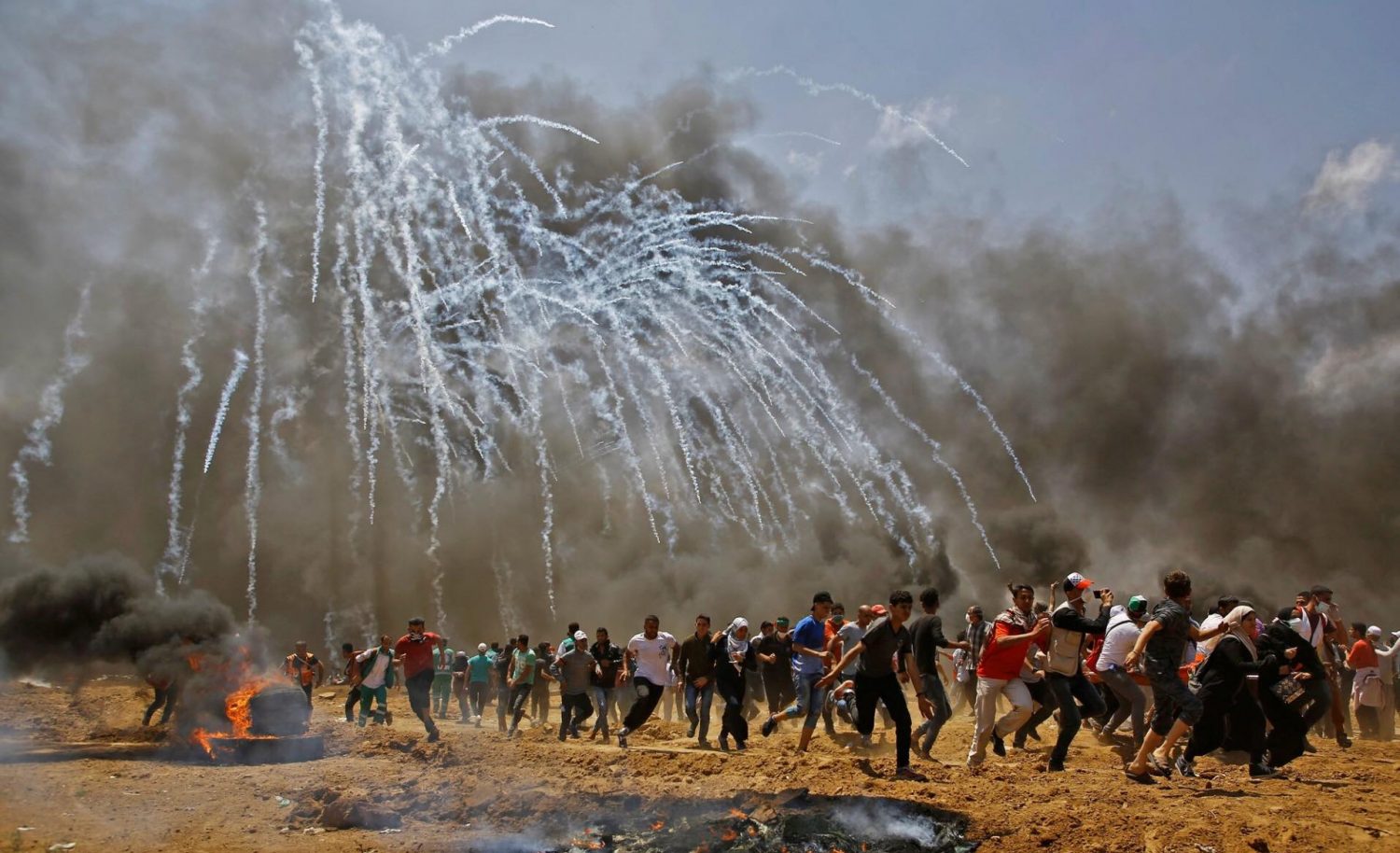 Palestinians protesters, including women and children, run for cover from tear gas fired by Israeli forces near the border between the Gaza strip and Israel east of Gaza City on May 14, 2018. The Israeli military forces killed 58 Palestinians. More than 1,100 were wounded by the Israeli military using superior deadly weapons. (Photo by Morocco World News)

This is where I part ways, theologically and ethically, with many of my Christian Zionist friends, many of them happen to be my ministry colleagues in the evangelical community.

Standing up with the Palestinians. This is also a proper time to reaffirm my solidarity with my Palestinian sisters and brothers in Christ who are suffering under the oppressive policies and practices of the Zionist enterprise. My heart resonates with the voice of a Palestinian brother in Christ, The Rev. Dr. Jack Y. Sara: “It seems that evangelicals in the US are ignoring the existence of their evangelical brethren in particular and Christians in general in the Middle East. It is almost as if we don’t exist. They don’t want to listen to our advice, which is born out of the reality on the ground. Often, our opinions and experiences are dismissed as merely ‘politically’ motivated. I wonder at their reactions and I cannot help but marvel at how they call themselves promoters of unity within the body of Christ.”

I’m also listening to Palestinian biblical scholars and theologians who are faithfully voicing out their hearts and minds along with their people. In his book, A Palestinian Theology of Liberation: The Bible, Justice, and the Palestine-Israel Conflict, Naim Stifan Ateek insists: “Justice is foundation for the resolution of the Palestinian-Israeli conflict.” And yet, he advocates “a plea for a strategy of nonviolence.”

Meanwhile, the Zionists state and its armed forces continue to abuse their military superiority against civilians, causing the perpetuation of Nakba — a 70-year catastrophic sufferings among a displaced people. I strongly condemn these oppressive actions of the Zionist forces against the Palestinians. Along with many voices of justice-and-peace advocates around the world, I shout “FreePalestine!”

Renouncing Zionist Theology. I grew up within that faith group that blindly embraced an American theology that justifies the oppressive actions of the Zionist State against the Palestinians. It is a sad reality that this American bigotry, wrapped in religious language, is still being perpetuated by many preachers.

I renounced this religious perspectives early in my theological journey. I repented that I embraced it as a young Christian under the influence of American missionaries.

I have deep respect and a sacred view of the biblical term ‘Israel’ (יִשְׂרָאֵל) and I cannot, by conscience, use it to describe the present state that occupied Palestine. Here, I’ll refer to this occupying force in Palestine as the Zionist State — as described by a number of Orthodox Jews.

The United States moved their embassy from Tel Aviv to Jerusalem. Many Zionist Christians celebrate this as part of biblical prophecy, thinking that this would open the way towards the rebuilding of the Jewish temple. But there is no such prophecy. In 2012, I shared with the evangelical pastors and bishops that Israel is not the sole focus of God’s blessings among Abraham’s children and that followers of Jesus must work towards peace between the Jews and the Palestinians. In 2014, I shared with the same Christian leaders that the God of Abraham, Ishmael, Isaac, and Jacob is a God of justice and righteousness and demanded that Israel practice justice and righteousness more than mere religious rituals and activities.

Repudiating the Oppressive Zionist Enterprise. While I seek to be objective, listening to the narratives of both Israel and Palestine, my ethical convictions mandate me to question how the current discourse among Zionist politicians are driven by fear and how their policies are unjustly imposed against the Palestinians despite their noble statements in their website.

This Zionist enterprise even persecutes their own religious minority who resist being drafted into the Zionist armed forces.

Sabeel’s statement of hope is worth noting here:

“This scenario envisages the total withdrawal of Israel from all the occupied territories including East Jerusalem according to United Nations resolutions 242 and 338. The Palestinians will establish their sovereign state on the whole of the 23% of the land of Palestine. One way to redeem the settlements is to make them the new towns for the returning Palestinian refugees. This can constitute a part of Israel’s reparations to the Palestinians. Israel must compensate the owners from whom the land was confiscated. The Jewish settlers who choose to remain in Palestine can become Palestinian citizens and live under Palestinian sovereignty.

As to Jerusalem, it will have to be shared. The city must remain open to all. A peace treaty will be drawn up and the two countries will become inter-dependent economically and will help each other develop their resources for the well being of both their peoples.

This is the formula which the Palestinians have been hoping and working for. Indeed, it is not the ideal solution, but it carries within it an acceptable justice which most Palestinians are willing to live with for the sake of peace and prosperity. Furthermore, as this scenario agrees with United Nations resolutions since 1967, it will ensure the support of the international community of nations. This formula gives the Palestinians a state as sovereign as Israel, rids them of the Israeli occupation, and restores to them the whole of the occupied territories of 1967. Indeed, a state within the West Bank and Gaza, composed of only 23% of Palestine instead of the 43% allotted by the UN in 1947, is already a very signficant compromise by the Palestinians. The Palestinians would have to give up their right to most of historic Palestine. Obviously, Israel, with the help of the United States and the international community, will have to compensate the Palestinian people.”

Last year, if my understanding serves me right, Hamas seems to have declared a new political program by opening themselves with the idea of a Palestinian state in territories occupied by the Zionist State in the six-day war of 1967. In Article 20 of the New 2017 Hamas Charter, it states: “Hamas believes that no part of the land of Palestine shall be compromised or conceded, irrespective of the causes, the circumstances and the pressures and no matter how long the occupation lasts. Hamas rejects any alternative to the full and complete liberation of Palestine, from the river to the sea. However, without compromising its rejection of the Zionist entity and without relinquishing any Palestinian rights, Hamas considers the establishment of a fully sovereign and independent Palestinian state, with Jerusalem as its capital along the lines of the 4th of June 1967, with the return of the refugees and the displaced to their homes from which they were expelled, to be a formula of national consensus.”

The response of the Zionist State, sadly, was negative according to CNN: “Hamas is attempting to fool the world but it will not succeed,” said David Keyes, a spokesman for Prime Minister Benjamin Netanyahu. As a Filipino who have embraced a peace theology, I’ll be waiting for the Zionist State to respond positively.

Prayer for Salaam-Shalom for all. I’m hopeful because there’s a new generation of Jews and Palestinians whose hearts and minds are open for a more just-oriented dialogue about their mutual peace. The mission of the Jewish Voice for Peace, for example, needs to be heard: “Jewish Voice for Peace opposes anti-Jewish, anti-Muslim, and anti-Arab bigotry and oppression.  JVP seeks an end to the Israeli occupation of the West Bank, Gaza Strip, and East Jerusalem; security and self-determination for Israelis and Palestinians; a just solution for Palestinian refugees based on principles established in international law; an end to violence against civilians; and peace and justice for all peoples of the Middle East.”

My prayer is that the new generation of Palestinians and Jews would strengthen their resolve as they pursue justice-based peace in their determination to plot a common future.

“Our vision involves two sovereign states, Palestine and Israel, who in the future may choose to enter into a confederation or even a federation, possibly with other neighboring countries and where Jerusalem becomes the federal capital. Indeed, the ideal and best solution has always been to envisage ultimately a bi-national state in Palestine-Israel where people are free and equal, living under a constitutional democracy that protects and guarantees all their rights, responsibilities, and duties without racism or discrimination. One state for two nations and three religions.”

What actions can we do together as Canadians?

We can support the campaign of the Mennonite Central Committee in Canada.

Urge your MP to show compassion for Gaza! Ask him or her to:

Permanent link to this article: https://waves.ca/2018/05/17/i-stand-in-solidarity-with-the-palestinians/