I STAND IN SOLIDARITY WITH THE PALESTINIANS; I PRAY FOR THE PEACE OF BOTH JEWS AND PALESTINIANS

FIELD NOTES AND REFLECTION ON THE MEANING OF ‘VIOLENT EXTREMISM’ 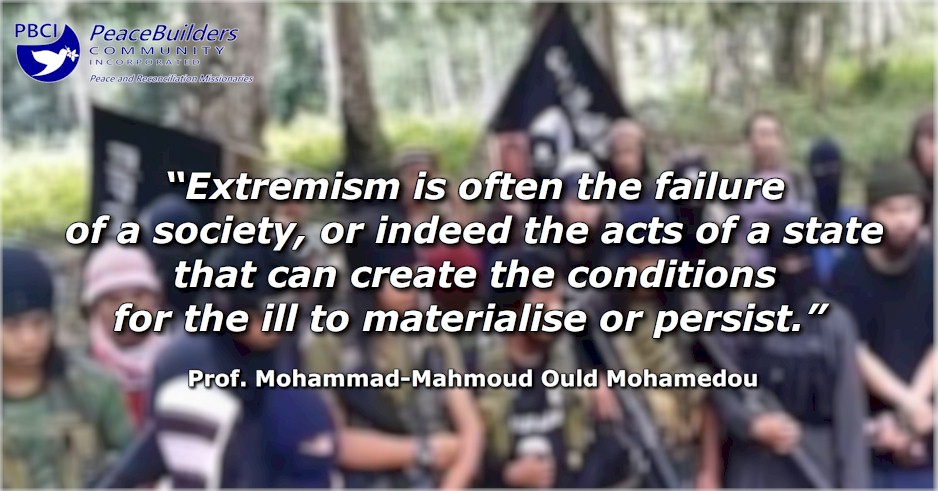 My peacebuilding colleague seems to have lost his confidence in non-violence. In an online conversation, he said: “Kaka Lakan, we have tried applying active non-violent approaches. Ten years. Ten long years… They’re killing us slowly… We might as well die fighting. Sorry, I’ll have to pick up my equipment again…”

Such were the words of Hassan (not his real name), a 29-year old Bangsamoro male from Central Mindanao. I assume he meant M16 automatic rifle and its accessories when he mentioned “equipment.”

I first met him when he was in high school. He used to accompany us around Ligawasan Marsh while distributing relief goods among his village folks in the midst of escalating armed skirmishes. Hassan actively participated in our peacebuilding training and completed the course with much enthusiasm. I saw him grow from being a responsible 19-year old peacebuilding volunteer into a young Moro intellectual who articulated and struggled for the liberation of his people from historical injustices. He was then convinced that Bangsamoro autonomy was possible through active non-violent means.

I immediately invited him to travel to Davao. We had a couple of days sharing hearts and minds like true brothers.

Just before his trip back home, we had coffee together. We gave each other a brotherly hug after a couple of hours of conversation. I said, “See you again.”

He replied with a sad smile: “Bye, Kaka.”

It was then that I posted a quote on social media. It served as a humbling, soul-searching note to myself:

But Christian pacifists would do well, I suggest, to recognize that in some situations they will have no clear peacebuilding options to advance, no obvious nonviolent alternatives to offer—and that recognition can and should drive them to prayerful silence.”

I kept silent for a couple of days. In my bedroom. Alone. Humbled.

A few days later, I found out that Hassan blocked me from our social networking connection. His friends told me that he joined a “violent extremist” group.

The language of Violent Extremism has become a popular term here in Mindanao. In most of the seminars and discussions I’ve attended, the definitions used were somehow similar to what Wikipedia posted: “Violent extremism refers to the beliefs and actions of people who support or use ideologically motivated violence to achieve radical ideological, religious or political views. Violent extremist views can be exhibited along a range of issues, including politics, religion and gender relations. No society, religious community or worldview is immune to violent extremism.”

Most of us in the civil society refer to this simply as VE. I like how Andrew Glazzard–a security consultant, and Martine Zeuthen–an anthropologist, examine this ‘VE category’. I resonate with their questions: “Is violent extremism, by definition, something carried out by non-state actors? In conflict situations, how can we differentiate violent extremists from other, more legitimate conflict actors? Does violent extremism always have to be ideological – can it, for example, be criminal, or even purposeless? Is ‘violent extremism’ merely a synonym for ‘terrorism’? More fundamentally, are terms like ‘extremism’ relative – in which case does ‘violent extremism’ mean different things to different people? These are not merely academic questions: what we call a phenomenon helps determine how we see it and what we do in response to it.

Personally, I don’t like this term. There’s so much confusion in the use of this language. Jason-Leigh Striegher, in his 2015 study at the Australian Graduate School of Policing and Security at the Charles Sturt University in Sydney, Australia, said: “By reviewing some of the current definitions of radicalisation, violent-extremism and terrorism in policy documents and academic literature, pertinent points within each have emerged… although the processes of radicalisation, the ideology of violent extremism and the act of terrorism have interdependent relationships, they are in fact three distinct terms that must be clearly understood. By examining each term and its definitions in isolation, a palpable distinction for each was evidenced and a revitalised definition for violent-extremism was proposed. Though acts of terror are not solely a derivative of the radicalisation process, understanding the relationship between the two is paramount to successfully countering violent-extremism. In isolating the three terms we are able to reduce misrepresentation; appreciate and successfully address root-cause issues; devise more pointed policies and programs for intervention; and cope with relevant legal statutes more effectively.”

My readings also brought me to the thoughts of Prof. Mohammad-Mahmoud Ould Mohamedou. He mentioned that violent extremism is fueled by three key factors, namely: alienation, retribution, and dispossession.

I saw some aspects of Hassan’s journey through these lenses.

Alienation. Hassan felt judged after the death of the 44 police commandos during the 2015 Mamasapano debacle. Being a young rural Moro who is committed to the liberation of his people primarily through the Peace Process, he worked alongside with non-Moro peacebuilding volunteers. Many of his friends in the civil society questioned the sincerity of the Bangsamoro after Mamasapano. Hassan felt left out in a number of meetings among peace advocates after Mamasapano: “Kaka, they forgot to invite me again. This is the fourth time they have forgotten to send me invitation. Am I still part of the committee?”

His Moro friends in their original hometown started expressing their doubts in the effectiveness of the peace process. They challenged Hassan if he was “with them” or “with us”. He was pretty sure that “them” — the Indigenous People and Christian peacebuilding volunteers — were “with us.” But more and more, he felt the gap between his Moro community and his non-Moro civil society colleagues in that particular town where he lives.

During our last coffee meeting, he felt the Mindanao Peace Process as merely the government’s way to appease them into inactivity while they perpetuate the historical injustices against the Bangsamoro. “I don’t believe they will really pass the BBL in Congress,” he said. The BBL is the Bangsamoro Basic Law which is now facing tough challenges in the Philippine House of Representatives. “It seems,” he continued while pointing his cup of coffee at me, “nothing will happen in your active non-violent approach.” I was feeling his angst even as he did his best to show respect with his naturally-meek personality.

The death of his cousins prompted him to question the effectiveness of armed struggle. That was the main factor why he volunteered as a peace worker and decided to proceed with a college education.

Right now, he seeks justice. He clarified to me that he understands “the difference between seeking revenge and seeking justice.” But this time, he will seek justice “within Islamic processes”.

“The Philippine justice system,” he complained, “is for the rich and for the powerful families only, Kaka.” And I agreed. I just don’t know what he exactly meant by “Islamic processes.”

Dispossession. Hassan also saw the loss of their family’s source of livelihood. Because of the cycle of armed skirmishes since his childhood, his parents were not able to sustain their rice farming. They lost their rice fields to money lenders who are based in a nearby city — mostly Christians. His parents now subsists through various seasonal employment with local business families.

Hassan’s friends told me that his family received financial assistance from a local Islamic organization. The same organization invited Hassan to join them in a renewed struggle that is “more Islamic.”

When I asked them what they meant by “more Islamic,” they simply said, “Extremist. What else?”

“Extremism,” according to Prof. Mohamedou, “is often the failure of a society, or indeed the acts of a state that can create the conditions for the ill to materialise or persist.”

The story of Hassan, however, may not be the big picture in the Autonomous Region in Muslim Mindanao (ARMM). A recent study conducted by the Institute for Autonomy and Governance (IAG) presents a more hopeful horizon. Their research findings are worth noting here in full:

I also appreciate the recommendations listed in the said study:

There is no single panacea to prevent the spread of a violent ideology or prevent people from joining extremist groups. However, considering the findings of this research, the following responses are suggested:
1. Adopt a comprehensive policy framework to prevent and counter violent extremism upon which national, regional, and local government units can develop and coordinate long-term programs on prevention and short-term programs on mitigation. This policy framework should guide the action of international donors.
2. Mainstream the value of Islamic moderation (wasatiyyah) in Muslim communities. The Government of the Philippines should cooperate with civil society, educational institutions, and religious networks to spread messages of inclusive Muslim beliefs to young people.
3. Develop materials so that leaders in formal and informal education system can ensure that all young people understand how extremist groups operate and the negative effects of joining extremist groups on themselves, their families, and their communities.
4. Promote a high-quality and moderate Islamic education sector. This should include facilitating the adoption of common supervision, accreditation, and standardization of curricula to ensure that the teaching and learning is consistent with mainstream Islamic philosophy.
5. Keep the public school system secular and use it and the informal education system as a platform for building inclusive culture, mutual trust, and understanding of unity in diversity.
6. Provide young people with genuine opportunities for accessible quality education both in the basic and collegiate levels for them to get jobs and employment here or abroad.
7. Provide avenues for young people to express their grievances in a nonviolent manner through various forms of peaceful processes.
8. Provide programs for people who show signs of post traumatic syndrome after exposure to violence and conflict.
9. Invest in high-quality and contextually-appropriate delivery of government services in areas at high-risk of extremism, particularly education and health services.
10. Fast-track the passage and implementation of the Bangsamoro Basic Law (BBL)/Enabling Law/New Autonomy Law that would address poverty and the lack of development through the efficient, effective, and responsive self-governance by way of implementing peace agreements with the MNLF and MILF.
11. Increase public and private investments with programs to attract business towards job creation in areas at high-risk of extremism.
12. Ensure all government jobs are provided in a meritocratic and nondiscriminatory process.
13. Ensure that all young people understand, both in school and out-of-school, how extremist groups operate as well as the negative effects of joining extremist groups on themselves, their families, and their communities.
14. Facilitate the rehabilitation and reintegration of the people who were previously involved in extremist groups.

While there is an important role for Government, the Muslim community itself can be at the forefront of developing solutions to extremism. Through a process of collective reflection and leadership, it is possible to pursue the many solutions to violent extremism that are rooted in traditional institutions and practices fundamental to well functioning Muslim communities.

I hope to meet Hassan again and continue our decade-long relationship as peacebuilding brothers. I pray for his safety. I pray that even in our differences in pursuing justice and peace, we would still seek to continue our interfaith dialogue and cooperation. My faith-based non-violent approach and his faith-based armed-struggle approach may be considered by many as two extremes in a wide spectrum of approaches towards radical transformation. But I’m determined to continue connecting with Hassan, and many of those like him, by building bridges of genuine relationship which is characterized by transparent communication, that would lead to empathy, and then eventually lead to mutual trust.

Because of Hassan and others like him, my commitment to this faith-based, active non-violent approach to peacebuilding is more strengthened in the midst of this discourse on a construct we refer to as violent extremism.

Permanent link to this article: https://waves.ca/2018/05/28/field-notes-and-reflection-on-the-meaning-of-violent-extremism/