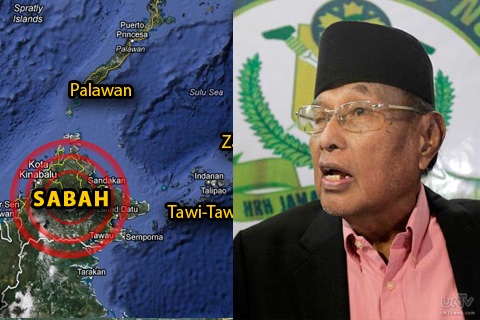 Sabah is a territory being claimed by the Sultan of Sulu, Jamalul Kiram III. “Sabah was known as North Borneo prior to the formation of the Malaysian federation. The Philippines, via the heritage of the Sultanate of Sulu, claims Sabah on the basis that the territory was only leased to the British North Borneo Company in 1878 with the Sultanate’s sovereignty never being relinquished. Malaysia however, considers this dispute as a “non-issue,” as it believes that the 1878 agreement was that of cession, and that it deems that the residents of Sabah had exercised their right to self-determination when they voted to join the Malaysian federation in 1963.” (Wikipedia: North Borneo Dispute)

I have been crying before God that the Kiram family expressed their claim on Sabah by sending 1000 armed men last February 12, 2013 instead of sending un-armed negotiators which has been the counsel of their fellow Bangsamoro leaders.

I have been crying before God that some financially able, but politically bitter pockets in Mindanao and in the Philippines, especially those whose business and political interests are based on war and armed conflicts, would use this claim of the rights of the Kiram family. I cry to God that all those concerned about this violent event in Sabah would be wise and discerning as the war-mongers are out to use anybody and any current event to advance their selfish war-based wealth and power interests.

I’m saddened that many of my Christian colleagues in Manila are crying war against Malaysia based on their impulsive reaction to media hype, on nationalist rhetorics, rather than by a sound biblical-theological lenses, informed by historical and socio-cultural conflict transformation processes that might help in de-escalating the current violence. I’m crying to God to help us, Christian leaders, to seek ways to be positive, effective and efficient contributors for peace on the ground rather than merely become bitter commentators from our comfortable, swivel chair, laptop or television perspectives on this issue.

I cry to God that President Benigno S. Aquino III of the Philippines, Prime Minister Datuk Seri Najib Tun Razak of Malaysia, the Sultanate of Sulu and its heirs led by Jamalil Kiram III may all exhaust the possibility of using active non-violent approaches to settle their conflicts.

God, help us, followers of the Prince of Peace, to be wise, prudent, informed, patient, as well as to be pro-active, rather than re-active, in our attempt to advance justice and peace. Please help us to be peacemakers in our words and actions.

Finally, help us, by the power of Your Spirit, to be an agent of Shalom starting from within us, blessing the people around us, and emanating Your Shalom to the events whether they are near us or far from us.

Permanent link to this article: https://waves.ca/2013/03/06/a-personal-lamentation-on-the-current-sabah-violence/