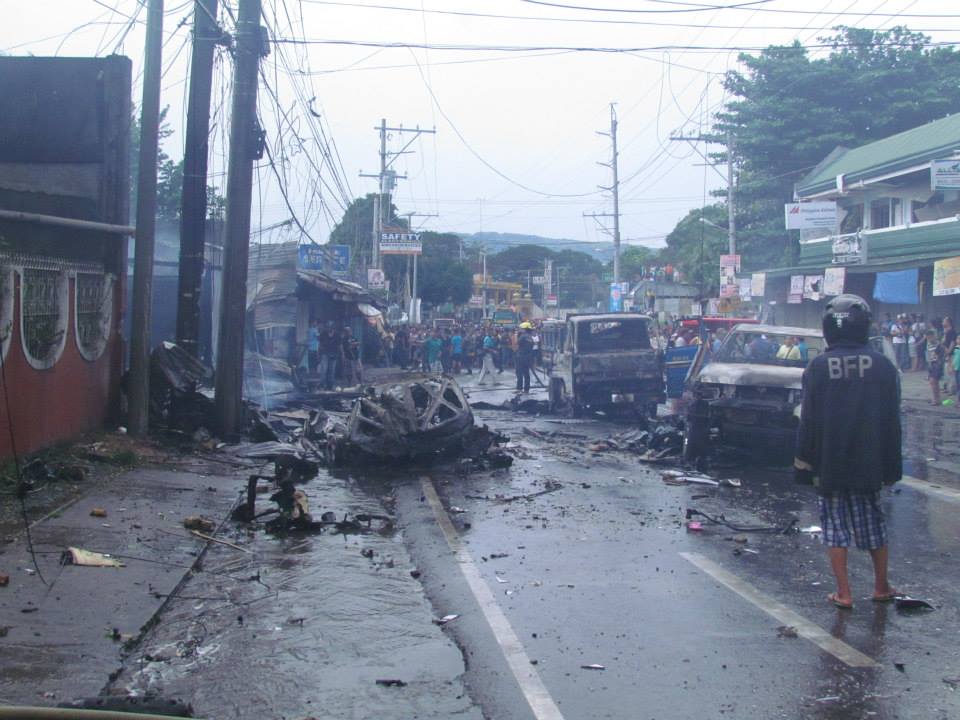 In 05 August 2013 at 1620H (PHT), a car bomb exploded in a crowded area along Sinsuat Avenue, Cotabato City. There were 8 people killed and 30, mostly innocent people, were seriously wounded. (Photo Courtesy: Zainudin Malang)

August 07. An improvised explosive devise (IED) fashioned from a 60 mm mortar projectile blasted in Midsayap, North Cotabato. Thank God, no one was hurt as it prematurely exploded very early in the morning. But later in the afternoon, seven government soldiers of the Army’s 12th Mechanized Company were riding a KM250 light truck on their way to Shariff Aguak when an IED exploded along the road in Barangay Nabundas. All seven soldiers were wounded and were brought to the hospital.

Crying for just-peace. We, at PeaceBuilders Community, Inc. (PBCI), cry for justice for those who were killed and for those who were wounded because of this exceedingly brutal act of crime. Our hearts are with the families of the victims as they adjust to a life without their loved-ones and as they deal with the trauma caused by this senseless violence. We condemn this cowardly act against innocent people and there is no justification whatsoever for this unjust violence.

We call on all authorities, from the national level down to the local level to conduct impartial investigations of all these bombings. We will follow the reports of the authorities as they do their duties and we expect nothing but a just closure of these cases.

Global and local perspectives. The global perspective is that Al Qaeda is threatening US embassies around the world. And we are told that, like a giant octopus, its tentacles will reach remote places like Mindanao. The Hon. Mujiv Hataman, governor of the Autonomous Region in Muslim Mindanao (ARMM), noticed that in the Cotabato car-bombing, they used a car bomb which is a common signature in the Middle East. In his opinion, this is the first time this actually happened in this city. Though he is not directly suggesting that this was a Middle East terrorist activity, he does not preclude such possibility. Meanwhile, His Excellency Benigno Simeon Aquino III, President of the Philippines, assured the Filipino people that there is no connection between Al Qaeda terrorism and the Cotabato car-bombing.

The local perspective is that, this might be “the handiwork of a bomb-for-hire group targeting a local city official,” according to the Philippine National Police. In fact, the mayor of Cotabato City had publicly testified that he received threats two weeks before the bombing. He believes that behind this heinous crime are very powerful people. But did he report this threat to his police department immediately after receiving it? Depending on the capacity and intention of the police intelligence, a police report would have been a good source of lead to prevent this apparent assassination attempt.

From the perspective of the so-called Al Qaeda threat, there seem to be a connection between the Cagayan de Oro and Cotabato bombings. Virtually all cities, municipalities, and barangays in Mindanao are possible terrorist zones, if one will put together all the respective travel advisories from the embassies of the United States, Canada, United Kingdom, and Australia. The Hon. Rodrigo Duterte, mayor of Davao City, expressed his respect for the intelligence capabilities of those embassies, along with our own national intelligence reports. So, in response to those travel bans for foreigners, he beefed up Davao City’s security alert.

There are, however, some progressive views that question the real intention behind the global terrorist threat. Take for example the case of the threats against the embassies of the United States. Is the U.S. exaggerating the so-called threat to their embassies to silence the critics of the National Security Agency’s domestic surveillance?

They thought that killing Osama bin Laden was the long-term solution for this problem of global terrorism? Now, they seem to be eating their own words!

It’s time for Americans to really review, understand, and evaluate the unjust aspects of their current foreign policies that enslave small nations.

Here’s an old perspective for a long-term solution outside Washington’s current box: Is it time, perhaps, to SOW JUSTICE around the world so that the Americans around the world would also REAP PEACE? “Do not be deceived: God cannot be mocked. A man reaps what he sows.” (Gal. 6:7 NIV)

Fear not, Mindanao! Given the kind of police capabilities and justice system we have, there is general skepticism whether these bombings can really be given closure based on justice. But instead of giving up on hope and allowing fear to paralyze us, it is time to be honest about our anger against injustice. We can harness the energies of this righteous indignation into positive, concerted, active non-violent movements towards justice and peace.

The bottom line in these bombings is to plant fear in our hearts so the real culprits can continue harvesting wealth and power through violence-based economics and corrupt governance.

And the future is now.

Permanent link to this article: https://waves.ca/2013/08/07/fear-not-mindanao-reflections-on-the-recent-bombings/